(Post 14 of 189. Thanks again to those who participated in the Fundrazr!)

After lunch on Thursday, I returned to my apartment for a nap and to do some work. By around 5PM, I was feeling a tad cooped up, so I decided to move my office to El Llano park and meandered up there.

What a scene! This is the neighbourhood of Jalatlaco, where the streets are not that modern touristy cobblestone, but that ancient cobblestone like I tripped over in Old Plovdiv.

El Llano was so refreshing. Oaxaca has been hot and sunny, but it’s not as humid as Mérida. I was surprised that I cooked myself as badly as I did (no sunburn, though!) on Thursday’s brief excursions because it doesn’t feel that hot to me.

I’ve seen lots of people running with spring-like shoes that look like they’re straight out of cartoon!

I cannot escape Yucatán, LOL. But I bet if I ever move here, such a cart would be welcome!

I read for a bit and then realised that I was seriously behind on jobs due by 11AM the next day and I had to go in for the night and work. But first, dinner!

On the way out of the park, I found a vendor selling ate de guayaba, yum!!!

It was still a little too early to find a cart where I could get tacos or other meal to go, so I decided to try out a dumpling place I’d passed a few times and which was open at 6:30.

I got this plate with my beer. The crunchy things are proper eggroll wrappers! The salad was wonderful, with a sweet and vinegary dressing.

There was a full menu, but I went with the dumplings, of course. I rather want to believe they were made right then and then and there because a) I couldn’t decide if I wanted veggie, pork, shrimp, or chicken and they said that they could make me some with a little of each all mixed together and b) the meal took some time to come out.

Now, I don’t pretend to be an expert on dumplings, having only ever had them frozen or at restaurants that likely serve them frozen (and my one unsuccessful attempt to make them!), but DANG. These were flavour bombs! I mixed super hot chili oil with vinegar and soy sauce to make a dipping sauce for them.

I felt the universe was speaking to me directly through my fortune cookie.

Happy days are definitely ahead; your struggles are over.

I had been unimpressed that morning by the tiny cups that came with the apartment, so I popped into an artisan shop to see if they had big mugs. Yup! And all hand-made, with not one like another. I tried the weight of several and found my favourite.

Before bed, I got a tad peckish and had my croissant from Boulenc. Good thing, too, because despite my precautions, the ants found the other pastry overnight and I was not able to enjoy it.

The rest of Thursday night is a blur. I was exhausted. It was 10:00 before I could call off and I was looking forward to watching the latest episode of Star Trek: Picard on my iPad (thanks, Amazon Prime!). I almost fell asleep twice watching it! So I’d say my second day in Oaxaca was seized!

I’m really glad that I waited to visit Oaxaca in that that Mexico is really home now. I remember my trip to Durango, my first time travelling away from a home base, and finding it hard to get my footing, not knowing if I could trust restaurants or how to find the things I needed. My Spanish language skills are so, so, so much stronger now, and I’m comfortable going into little shops because I can ask for what I’m looking for. It does mean that Oaxaca doesn’t have quite the shine a non-jaded traveller would give it, but that just means I’m making more of an effort to find the city’s soul beyond the shiny wrapper. I’m much more aware, of example, of what is a true souvenir (like my mug!) and what is made in China crap that I could literally buy in any city in the Republic. Two days in and Oaxaca was continuing to prove herself to be just what I’d hoped she would be, a place where I would instantly feel at home and comfortable.

(Post 13 of 189. Thanks again to those who participated in the Fundrazr!)

So Thursday for lunch, I decided to try an averagely priced comida corrida/menú del día, and this one had options that appealed to me. 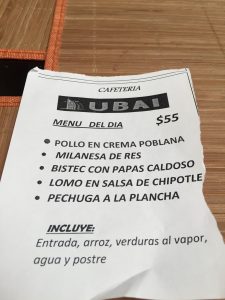 I’ve been in carb overload and needed solid protein, so I went with the milanesa de res, which is thinly sliced meat, in this case beef, that is breaded and pan fried. The pork version is one of my favourite local dishes in Mérida.

I was brought a soup of penne in tomato broth (caldo de tomato) — subtly flavoured, but tasty.

A jug of hibiscus (jamaica) water seems standard for these meals in Oaxaca. I appreciated that it was not sweetened and I drank most of it!

Tortillas, of course. They look different than the ones in Sinaloa and Yucatán — each region has its own version!

The Oaxacan tortillas are made with masa, like in Sinaloa, and they are bigger and thinner.

My main came out quickly. Besides the pork, I got spaghetti in tomato sauce like you get in Yucátan, a few fries (including ketchup!), and a rice that surprised me as it looks so plain but was infused with garlic! The beef was tender and well seasoned — I was worried I’d regret my choice as I’m not a huge fan of beef, but this was great. And, finally, vegetables!

The meal came with a super hot smoky salsa that I enjoyed with the tortillas. I always joke that, as a French speaker, I eat pain (bread!) all day long, but this was PAIN. There’s a difference between food that has bite to it and food that is just plain uncomfortable to eat, like the tacos I had my first night here. I’m going to keep working at getting my tastebuds used to such things as it is opening up a world of flavours to me. I mean, sure, the salsa hurt, but it also had great flavour under the heat. I would never have thought that just a few years ago.

I don’t know what I was expecting for dessert, but a fluffy mini pancake with compote and fruit was not it! So cute and yummy!

All of this for just 55 pesos! I find that my 45-50-peso meals in Mérida are a good to very good deal, but they’re nothing like this. I don’t think I’d cook much if I lived here!

(Post 11 of 189. Thanks again to those who participated in the Fundrazr!)

I walked over 11KM my first day in Oaxaca, but unfortunately, I did not sleep well my first night, a combination of a horrible typical Mexican mattress and my not having slept in a bed in a full year. The awful bed was a shame because, otherwise, the room was quite dark and quiet.

I had coffee and breakfast at the apartment and put in several hours of work before heading out for a ramble. I made the decision to keep Thursday and Friday very unstructured, with no museums or organized activities as I had quite a bit of work (proofreading) to do and I didn’t want to go into “vacation mode” just yet.

I thought a raspado (shaved iced) with pineapple and chamoy would be lovely, but it was sadly too sweet for my new tastebuds and I was unable to finish it (I call them new, but I’ve had them six years now…).

These remind me of something I saw in Europe, maybe Veliko Tărnovo, Bulgaria?

Lots of stray dogs around time, but they mostly look well kept.

This is the famous Boulenc bakery, at which I bought my first real croissant in years.

My apartment is close enough to everything that I can go in and out. I headed home to put away the baked goods and to do more work.

Then, I set off in search of lunch by the Zócalo. On the way there, I cut across a courtyard with a lovely stone pattern.

The gate was lovely as well.

The plan had been to have my first comida corrida/menu del dia at a more upscale restaurant on the Zocalo… but the special of the day was… Yucatecan cochinita. You can’t make this stuff up! I ended up wandering around and found a more average meal, which is the subject of the next post!