(Post 10 of 189. Thanks again to those who participated in the Fundrazr.

I have been up since 2 AM, so this will be a quick one. I was hoping to post a video of my apartment, but I am yet again in a place where YouTube won’t let me upload a video in any sort of reasonable time frame. I know such places exist because people make a living on YouTube, but I have yet to encounter them. At any rate, you may or may not get that tour at some point…

There was a lot of cloud cover, so when we finally broke free and saw the mountains, it was an amazing sight. It actually rather reminded me of flying over Iceland!

There are several ways to get to Oaxaca centro from the airport. One of the cheapest is to take a collectivo, or shuttle. They collect people going to roughly the same area and then the fare is split by the number of passengers. I paid $95, plus a $10 tip. My understanding (and that of the owner of the apartment) was that I’d be brought to a central location and have to make the rest of my way using city transit options (walking, bus, taxi), but, nope. I got dropped off at my door.

My host arrived quickly and showed me around. My apartment is frankly amazing and perfect and a miracle and I wish I had the video to show you what I mean. I will hold you in suspense. 🙂

My friends D&L from Halifax who are watching B made sure that I could hit the ground running as my time here is short, so I was already orientated! I headed off promptly to find the Oaxaca Lending Library and breakfast, as I’d already been up for seven hours and was just running on a cup of coffee!

Just minutes out from the airport, I knew I was back in the Mexico that I fell in love with. That was further confirmed on my walk this morning. I felt more at home here in the first hour than I’ve felt in Mérida in three years. 🙁

I need to find out what a retaco is. The only reference I’ve found to one wasn’t very illuminating.

This is “El Llano,” a park that is the beating heart of this community. One of Mérida’s biggest deficiencies is that there aren’t more parks like this one. Oh, there are some, but not nearly enough for a city of its size. I have to go way too far to get anything like this.

I wanted a really nice breakfast, multi-course, preferably with green enchiladas. Can you believe I found such a thing with almost zero effort?!

I was promptly offered excellent coffee (but sadly served with powdered creamer).

The server correctly guessed that I had gotten off an early flight, probably hadn’t eaten, and wouldn’t make it to my enchiladas, so she brought me this basket of pastries!

Look at this plate of fruit!!!

Then this landed and I realised I should have paced myself, LOL (and, NO, I did not have all those pastries!). Thankfully, the bread wasn’t great. I ended up eating one enchilada and then just the delicious cheese and chicken, with some sauce. The server thought I didn’t like my meal, but I was quick to reassure her that everything was wonderful!

I was done with breakfast by 10:55, just in time to catch the 11AM Oaxaca orientation tour at the lending library around the corner:

Mérida has a similar expat library, but I’ve never been. It was here today that I realised that my initial negative encounters with the super active Mérida expats played a huge role in how little I’ve integrated. 🙁 At any rate, this orientation is a must-do. I learned a lot about the city, some of the things to do, and also a bit about what it’s like to be a resident here.

I then ambled back towards my apartment for a much needed nap and to do some work. My proofreading business is finally take off and I’m going to spend most of tomorrow reading, but I’m sure I can find myself a nice café to go spend a few hours at, or I could even go to El Llano and work outside as the weather is pleasant and not as humid as in Mérida.

At some point (it’s been a loooong day!) I checked out the Mercado de la Merced, the nearest market to my apartment. You could buy all your basic groceries there. If I decide to cook, I will go get everything there. The produce stands were as lovely and fresh as in Mazatlán, but a fresh squeezed grapefruit juice was a whopping 25 pesos (worth it! 🙂 ).

I eventually made it to the zocalo, the main square.

I could not for the life of me find my change purse at home and decided to buy one here, as well as maybe a small bag for just going out for short walks. I’d done my research and knew that the only place I was guaranteed to not find the same mass-produced tchotkes as you see in all the tourist spots in Mexico was La Casa de las artesanías de Oaxaca, so I popped in there on my way back to the apartment. I found these beauties for 307 pesos — way more than I would have paid for similar-ish items in a tourist shop, but these are unique and handmade and I’m supporting local artisans. I will be back to pick up at least one table cloth and maybe some more items — I’ve had a Oaxaca handicrafts shopping list and budget for eons!

Apartment exterior sneak peak. It reminds me of apartment complexes I saw in the Balkans and Spain, several walk up buildings sharing a common courtyard.

I did some more work and went out again, this time in search of almond milk. I found coffee on my way back from the OLL, so I was eager to be able to make my coffee at home this week. My host gave me a few suggestions after I texted her for help, but a lot of the places she recommended were closed by that hour as it was coming on to 6:00. There is what I understand to be a “proper” supermarket nearish me (Pitaco), but it’s across a main thoroughfare and felt like too much work to get to. So I gave up on that and ambled my way back to the zocalo to find something light for dinner and to see the Wednesday night dancers. 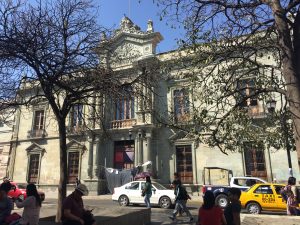 I was running on fumes by the time I hit the zocalo, so the first place with tacos and cold beer got my business. I struck tacos campechanos off my long list of tacos to try — these were beef, chorizo sausage, and pork rind. The tortillas were super thin and every single one of those salsas was liquid fire!

I then very easily and quickly found some gelato and settled in for a few minutes to watch the dancers. Maybe one day I’ll be able to share the video. I don’t think it’s anything formal, just couples enjoying the music. We have that in Mérida as well down at Plaza Grande.

I didn’t last long, unfortunately, as I was done. I meandered my way home and tried the last shop my host suggested. They had my brand of almond milk, but sweetened. I accidentally bought one of those recently and couldn’t get through it. The reason I need almond milk is because I don’t digest regular milk well. The shop had a regular milk marked lactose-free and easy to digest, so I’m going to try that. I added a pastry and a couple of bananas from the produce place next door and I’m set for the morning. Oaxaca has “comida corrida,” which is like the menú del día in Spain, a several-course lunch for a very low, fixed cost. So the plan is a light breakfast, comida corrida for lunch, and then something fast foody like tacos for dinner.

So far, Oaxaca is everything it promised it would be — accessible, vibrant, a bit chaotic. I can’t wait to unlock a few more of its secrets!