I left home around 9 this morning to go explore New Orleans’ French Quarter. I decided to take the Algiers Ferry to get there. It’s a good thing that the RV park gave okay directions to get there because there is no signage whatsoever and you would think you were driving through slums a tourist has no business being in (sorry Algiers Point).

The ferry is free for pedestrians, but, SURPRISE!, you have to pay $10 to park for the day.

I made the 9:30 ferry and was across the river in less than 15 minutes.

Arrival on Canal Street is a little brutal as the ferry building is DISGUSTING. OMG. The place reeks of urine and the puddles are obviously not water. And you have to go through quite a bit of it to get to the street. I wasn’t the only tourist trying to find the exit as fast as possible.

On the street, you find yourself in the heart of touristy NOLA, with the Imax and Aquarium on your right, the Harrah’s casino directly ahead, the French Quarter a few blocks ahead to the right, and the Riverwalk behind you to the left. Canal Street is lined with palm trees. The day I become blasé about palm trees is the day I hang up my traveling shoes!

I walked quickly down Canal to Decatur, ignoring the panhandlers, and then headed into the French Quarter.

I didn’t want to do any museums today, but rather just walk the streets and soak in the ambiance. So I began to stroll fairly aimlessly, occasionally referring to my map to make sure I stayed within the confines of the tourist section. Its limits are actually quite obvious.

My favourite part of the area is the architecture. The 18th-century buildings have survived to this day because they are built of cypress, a rot-resistant wood that termites don’t like.

The French Market held my attention for a bit and I spent some time eying the wares, everything from jewelry to really tacky coasters. There were also some food vendors. But the market was just opening up, so I decided to return after lunch and continued my wanderings.

I found a gelataria on a side street where I was able to get some chocolate gelato, a delicious treat that was perfect for the muggy temperatures.

The weather wound up being quite good even though the sky threatened to rip open as it was very dark and grey. I felt extremely under dressed, which was hilarious since the feeling was purely psychological. I’m just so used to wind + grey sky + spitting rain = being frozen solid. In fact, my capris and tee-shirt were perfect and a nice breeze made the humidity tolerable.

Lunch was had at Café Maspero’s, recommended by Eugene yesterday. I figured that I had to eat a mountain of fried seafood once this winter and this was going to be it! $21 including the tip and tax got me a humongous strawberry daiquiri (I doubt there was alcohol in it) for $3 and a ginormous ‘seafood platter’ for about $14. It had catfish, oysters, shrimp, and calamari. I had never eaten oysters before (!) and I think I might like them. 🙂 For fried seafood, this was very good and I do not regret my lunch location choice!

I walked around some more after lunch, then headed out of the French Quarter to check out the Riverwalk shopping centre. I was sad to learn that all the local vendors, many of whom had shops with interesting products, not just touristy crap, are being forced out to make way for the Riverwalk to become an outlet mall.

The owners of Nugget City were leaving on a cruise this morning. Could this be one of their ships?!

The passenger area of the ferry seen from the lower level.

The seats were hard, but it’s barely 10 minutes across the Mississippi.

These birds are obviously used to the ferry.

This guy was utterly unflappable and had to be shooed away!

Intersection of Canal and Decatur. Canal is so named because there was supposed to be a canal built in its location.

There’s a Bubba Gump place on Chicago’s Navy Pier, so can we say tourist trap?

Typical side street of the French Quarter.

Many streets in the French Quarter have signs showing the original name of the street from when the Spaniards owned NOLA.

Entrance to the French Market, where you can find all sorts of treasures.

I love all the unexpected bits of French all over the place.

This sort of balcony screams ‘New Orleans French Quarter’ to me.

This sort of balcony screams ‘New Orleans French Quarter’ to me.

The streets are really close together, so it’s nice to get a breath of air when they open up like this.

The Sweet Palate. I was looking for ice cream and scored when I stumbled on this place that sells gelato!

A small cup of their divine chocolate gelato. Mmm!

Bourbon Street! It wasn’t raining, but threatening to. The sky was spitting.

Bourbon Street was pretty quiet at 10AM, but there was some music to be heard.

One of the many buildings that looks like how the French Quarter felt: very dank. Not humid, but dank, like a mouldy basement. I wonder if it was like this before Katrina.

An unfortunately named restaurant. Vacherie means something like a backstabbing act or a bad joke.

Tropical Isle, home of the hand grenade, the most potent NOLA drink.

Legal notice to stop renovations. Tourists know this area as the ‘French Quarter’ but it is officially the ‘Vieux Carré’ (old square).

Perfect parking spot for a Vespa!

The guide recommended Café Maspero’s as a good place to get cheap fried seafood platters. I looked at other menus in the area and saw that most restaurants offered variations on the same theme for about the same price (NOLA is VERY affordable, to my surprise). I decided to take the guide’s advice as the restaurant had windows open all around and promised a nice breeze.

I ordered a giant strawberry daiquiri for $3. I don’t think there was any alcohol in it. It was very refreshing! The meal came with a salad. Yay for veggies!

My giant mound of fried stuff. The fries were dismal, but the seafood was GREAT. The batter was light and crispy and I could actually identify what I was eating: catfish, oysters (my first time trying them!!!), shrimp, and my favourite, calamari, which were melt-in-your-mouth tender. I’m not that found of deep friend seafood, but this passed muster with me!

The meal came with horseradish and tartar sauce, and there were other sauces on the table. It also came with one wedge of lemon, which is what I like on my fried seafood. I asked for, and got, a few more wedges.

There were two slices of bread hiding under my seafood! To absorb the grease, perhaps?

I got a lid with my bill!

The biggest tourist trap in the area, the Café du Monde, offering café au lait and beignets. After reading up on it, I knew better than to waste an HOUR waiting in line!

There were a few gator offerings, but I’d done my research and knew that it’s not local food and that NOLA is not the best place to try it. Boudin is blood sausage.

Whit’s last fling before the ring!

The LaLaurie House is considered to be one of the most haunted houses in NOLA. A 19th-century owner tortured her slaves here.

Info on the walking tour pamphlet about the LaLaurie house where Delphine LaLaurie was discovered to be treating her slaves badly.

Recipe for a ‘Katrina Martini.’ It sounds vile!

This little fellow was sleeping in the window of the French Quarter vet,

Info about the kitty. He sounds like quite the character!

You can reserve parking to visit the French Quarter vet.

Just one of a kazillion magnificent homes in NOLA. 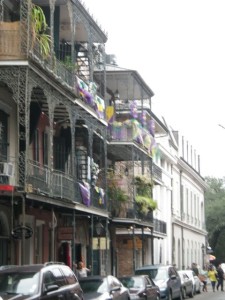 I would know instantly where this picture was taken even if I had never been to the French Quarter.

The Supreme Court of New Orleans.

The Supreme Court of New Orleans.

Guess in the comments what this place is!

Royal Street used to be Calle Real. Real was also the French word for Royal at the time, hence Montreal — Mont Royal.

Saks 5th Avenue is open by appointment. I doubt I can afford to shop there. 🙂

The inside is worse. This place is NASTY.

Entrance to the Riverwalk shopping centre.

There’s a Café du Monde in the Riverwalk. I really wasn’t hungry, but there was no wait and I knew Croft would shoot me if I didn’t try their beignets.

You get three beignets (puffy deep fried bits of dough covered in powered sugar) for $2 and change. One would have been enough for me! They are also famous for their chicory café au lait.

I ate my beignets while watching the Mississippi, a much more relaxing experience than the frenzied pace of the French Quarter café.

They were like doughy pillows. I recommended shaking the bag on occasion to get more sugar over them. Prepare to be COVERED in powdered sugar. Verdict? Meh. 🙂 I’m just not that big on doughnuts (shocking for a Canadian, I know).

WHY?! They spent money on several signs like these. Couldn’t they have hired a translator, too?

People marching into the cruise ship.

This sign claims that NOLA has a special budget for removing alligators’ from people’s yards….