Well, I got my exercise in today. Here’s a rough overview of the bit of walking I did, which does not highlight the fact that the trip included climbing 150m (492 feet), including 339 steps.

Dale and I had wanted to climb El Faro (the lighthouse) since we first heard about it. She did it with a group of friends recently and was keen to show me how to get there. We waited this long to make sure we were in decent enough shape as it’s quite a hike up, never mind actually walking to the start of the trek and then back again. I’ve been walking the beach daily for weeks and have start running again, just two or three kilometres three times a week. So that in combination with how well I did hiking in Utah, I knew the Faro wasn’t going to be that much of a challenge.

I met Dale on the beach at 8:00 this morning and we walked to the beach panga. I only paid one way since I had errands to run downtown that would bring me closer to the village panga for the trip home.

Goat Island and the Lighthouse.

From the Maz side, it was a pretty quick walk by the docks to get to the start of the lighthouse trail. The streets were very busy and there weren’t really any sidewalks, so we had to watch where we were going. I found the start of the bus route that terminates in the Golden Zone.

Ah, this is where the Titanik boat I saw the other week docks. What a name for a boat!

Restaurant atop Paseo del Centenario. You’d work up quite an appetite climbing those steps!

The lighthouse trail starts of gently with an ascent along a rutty path. It then becomes challenging when you reach the first of the 339 steps. This is the only way to get to the Faro, on foot. It’s an incredible amount of work to get there if the point isn’t to get exercise. On the way down, we passed painters going up and they looked in pain, one carrying a huge bucket of paint, another the ladder, another the miscellaneous equipment!

Access to the Faro. Don’t let the entrance fool you, pedestrians only!

The path gets rough very fast.

I was in fine shape for the climb, but stairs are worse than slopes and my knee was not happy, creaking and shifting and swelling the more I progressed. I made sure to only step up with the left knee.

We paused periodically to take in the amazing view and take pictures, so we got to the top in about 20 minutes. There, you can compare your time to statistics to see if you are an elite, expert, sportive, excursionist, or recreational user of the trail. Even if we had done it without pauses, I’m pretty sure we could not have done better than the excursionist rating (11 to 20 mins)! The elites are the ones who run the trail.

Starting to climb, but still fairly level with the higher parts of Maz.

Dale thinks this is a sewage plant, but I’m not sure as it’s attached to the university.

Looking out to Isla.

View of the docks.

This one shows how much manoeuvring the cruise ships have to do to enter the port of Maz.

Lots of garbage cans along the way. I liked the Comic font. 🙂

The view from the top of the world’s tallest natural lighthouse was amazing! I could see all of Maz and beyond laid out below me. It was a fantastic way to really get a lay of the land. Dale and I couldn’t stop pointing out landmarks, from the hotels on Isla to the cathedral to the resorts in the Golden Zone. She was amused that the first thing I spotted was the Pacifico Brewery. 🙂

Stats about the climb and a way to evaluate your fitness level.

Goat Island looked so insignificant from up there!

All of Maz laid out below us.

The cathedral is right smack in the centre of this one.

You can really see the Pacific Brewery in this one; just look in the upper third right in the middle.

Looking towards the Golden Zone.

Some people use these shortcuts that requiring clambering. Looked like fun, but I wasn’t dressed for that.

We eventually headed down and walked to Paseo del Centenario, which took us to Olas Altas, because Dale had finally found the Looney Bean coffee house and wanted to show it to me since I’m almost out of coffee. I can now say I’ve walked just about the entire Malecón!

First time I’ve seen anyone lock up a bike, much less of the motor variety, here.

I love sidewalks in Mexico. Notice the pole right in the middle of it?

Looking back at the lighthouse.

Castle on a hill.

Can you imagine having a front door and garage right onto a busy road with blind curves?!

I liked the look of this building.

Their address plaque says ‘No number.’

The first bronze statue on this end of the Malecón.

Official start of the Malecón at this end. 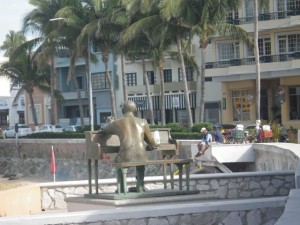 I’ve now seen and photographed all the statues along the Malecón.

When we got to the Looney Bean, much forehead smacking occurred. I’ve been by it dozens of time, but when it’s been closed! You can’t see the sign unless you are on the Malecón.

The Looney Bean at last!

My hope was that the Looney Bean would have coffee beans as it is a much more convenient location than Rico’s. They do! They don’t have nearly the choice (only ‘house blend’ and Chiapas) and they are more expensive, but since I save the 20-peso round trip bus ride, it’s a better deal.

One pound of Chiapas, their strongest coffee, was 120 pesos. I bought a half pound and the cost was 70 pesos. So a pound is a better deal. It takes me about three weeks to get through half a pound, so I prefer to pay a bit more and have fresh coffee. I had them coarse grind it for me. The grinds smell divine, so I’m optimistic I will like it as much as I did the Veracruz!

Because we were so hot and sticky, neither one of us was in the mood for having a coffee there (!). I suggested we head to Panamá’s bakery because I honestly thought I was going to faint from low blood sugar (yes, I had breakfast before the climb. I’ll have more about that in a later post). There, I got one of their ham, cheese, and jalapeño sandwiches and a pineapple strudel thing for 24 pesos total, a cheap and yummy lunch!

After, Dale went to the HSBC bank. We then agreed to split up as she was ready to go home and wanted to take the beach panga while I wanted to go to Waldo’s and possibly Ley’s, which put me at the village panga.

I wasn’t 100% sure where Waldo’s was from the HSBC, but I knew the general direction and got there without any detours whatsoever. I’ve definitely got the lay of the land! Waldo’s had what I wanted, inexpensive laundry detergent, so I was good to go. I was not tempted to buy any groceries (future post again), so I began the long schlep down (and up and down and up and down) Leandro Valle to Emilio Barragán to the panga to Isla to home. I was exhausted when I got home, much more so than I would have normally been after such an excurison (future post again).

Dale is leaving Isla next week and moving to the Golden Zone. I will miss my friend. I know I will still go out and do things and it’s not like we won’t meet up again, but it’s not the same. For one thing, going out in the evenings will be more expensive since I’ll have to pay for the entire pulmonía rides. But her new RV park is right on the bus line, so I know I can go visit cheaply. And, best of all, she’s thinking of going to Montana this summer and so is seriously considering a stay at RV Park Chez Rae!

I’m so glad we had a chance to do the Faro together. I don’t think it’ll be my only time making that climb!