I dragged myself out of bed as early as I could Sunday morning since I was planning to drive the libre from Durango back to Mazatlán and I’d been warned it could take up to eight hours, twice as long as the cuota had taken! I was going to gain an hour with the time change, though, which helped. I decided that I would keep an eye on my arrival time and if it looked like I was to get to the start of the Isla road later than 3:30 p.m., I would leave the libre and take the cuota. I was worried about the condition of The Road since Maz had a horrible weekend, weather-wise. Poor Contessa and Colin had to evacuate! Contessa had blogged that The Road was in decent condition with no further rain expected, but nevertheless, I approached my day with the mindset that the last hour could be very, very hellish…

I checked out of the hotel at 8:00, with the plan being to drop my stuff off at the truck and then go get breakfast. The hotel clerk stamped my parking ticket, signed it, and put the time of checkout on it.

The parking lot gates were padlocked shut, so I rang the bell. The attendant came out and I asked if I could just drop off my things. No problem. He let me in and then back out again.

I then wandered a bit around and was disappointed to find that almost nothing is open before 9:00 or 10:00 on Sundays! I had to settle for crappy Oxxo coffee (should have just had the hotel coffee!). The one restaurant that was open didn’t want to serve me. I went in and said hello to the ladies behind the counter (diner-style restaurant). They completely ignored me. I took a table and after being ignored another minute, I went back up to the counter and asked for a menu. I was ignored again. So I left. *shrugs* I’ve had this happen a lot NOB, but it’s usually in small towns, where the restaurants don’t like tourists and prefer to only serve their regulars. I ended up buying some pastries from a lady on a street corner! Not quite what I wanted ahead of a long drive, but better than leaving on an empty stomach and I figured that my last banana would balance things out, nutrition-wise!

The parking lot gate was locked again when I returned, but this time I didn’t even have to ring the bell. The man examined my ticket and confirmed that I didn’t have to pay anything, then wished me a good trip. Since he was waiting for me to get out so he could close the gates again, I didn’t dawdle and was glad that I had programmed Isla as ‘home’ on my GPS, so it was very quick to get that set up. But the GPS wasn’t keen to route me on the libre, so I knew that the 11:30 (Sinaloa time) ETA would not be reality!

I had no trouble navigating my way out of Durango until I got to this intersection.

It was very bewildering, with poor signage. I wasn’t even sure if I was in the correct lane to make a left turn. The longer I sat there, the less certain I was about when it was my turn to turn and there was a surprising amount of traffic for early on a Sunday, too much for me to feel comfortable just taking my chance of not getting into an accident. I was able to make a discreet U-turn and then pulled over to wait for someone else to get to that intersection with the intention of turning left, which took only a few minutes. When this car turned left, I still had no idea of what prompted the driver to decide it was time to do so, but we made it without getting creamed!

I started on the libre at about 9:00 after getting fuel. Almost immediately, there was a scenic lookout!

The road was very twisty. You can see a bit of that here (sorry, the phone takes such horrible pictures, but I’d forgotten my camera charger!):

We occasionally would pass or cross the cuota.

This was around a military checkpoint. There was one on the libre, too, but I was completely ignored and rolled through it. I had one more checkpoint a few hours later where I had to make a brief declaration.

I found a rest area with a really fancy bathroom entry system: a coin-operated turnstile! I had no idea how much to put in, so I tried $5 and that got me in, then I heard the clang of coins being returned. I got $3 in change. $2 was a bargain for such a clean bathroom with as much paper as I wanted, soap, doors, running water, etc. My previous rest stop had had a toilet with no door (great view to the road!) and no seat, with a bucket of water by it for flushing… Bathrooms in Mexico run the gamut!

At one point, the libre and cuota run side by side, with a divider between them:

I could have rejoined the cuota here, but was making okay time:

The variety of the landscapes I encountered during the day was dizzying. This felt like I was driving through New England!

The air here was just so clean and fresh. The sign isn’t important (slow down, your family is waiting for you). I just liked the waterfall behind it. 🙂

Welcome to the Sierra Madres!

The Espinazo del Diablo/Devil’s Backbone section is just a tiny part of Mex-40. The start of it is well marked!

The road started getting a little twisty…

Go home, road, you’re drunk! By this point, I had slowed to a crawl and was coasting in 1st gear to save my brakes. I had a lot of impatient drivers going around me!

Passing one of the bridges on the cuota:

The road leveled out at a small town called Concordia, just before Villa Union, and then it was super fast going to Mex-15.

I was exhausted by this point. The road really is challenging, especially when “les gens te pousses dans’l cul” (when other cars are riding your bumper). It was very scenic and fun to drive in a standard, though! I’m glad I drove it once, but the $500 in tolls is worth the time and effort saved if going to Durango regularly. I don’t think I’d want to do the libre in an RV, but a lot of RVers I know prefer that route because the RV tolls are insane. RVers break up the day by overnighting partway.

I stopped at an Oxxo just before the turn to get an Electrolit since I was parched, then braved the two lefthand turns in Villa Union to get some snacks at Panamá’s. It was then just a short drive to the airport turn off.

The first bit of the Road was muddy, but not bad at all and I actually thought, “I’m already at the paved section?!” when I got there! The last unpaved bit was fine. I got through in about 20 minutes! Door-to-door, the trip home had taken six hours, fully two more than the trip to Durango.

I’m really glad that I drove both the cuota and the libre. I can see how the cuota is going to change the life of people living around Durango as it is cutting down on their isolation. But I also feel bad for the folks along the libre who are losing their livelihoods, judging from the number of businesses that have shut down.

But since neither road is great, I’m taking the bus to Durango the next time I go!

I left home around 9:30 on Thursday, with my ETA in Durango being about 2:30 with the one hour time change. The Road out of Isla took me 28 minutes, but that’s only because I was taking my time. It was in surprisingly good shape!

I stopped for fuel in Villa Union, where there was also, very conveniently, an Oxxo (coffee) and a Panamá (goodies for the road)! I started on Mex 40D (cuota) at about 10:30.

To my surprise, the brand new road was in terrible shape and huge sections were under construction. It was very slow and tedious going. I didn’t take a lot of pictures because there weren’t many places to stop, including on the Guinness Record-holding Baluarte Bridge, which wound up being very underwhelming from the point of view of driving over it. There are tons of spectacular photos of it on the web showing it off from better vantage points than I ever had!

I had plenty of time to admire the scenery:

I liked how this tunnel is open to the world:

Sometimes, I felt like I was on top of the world:

I did not like this super, super, super long tunnel with lots of glaring lights. I drove it almost blind: 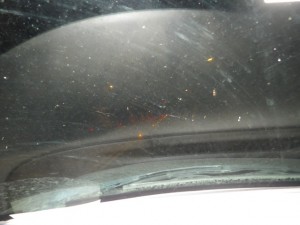 A miniature version of the Baluarte Bridge:

Here, you can see the tunnel with windows in it:

Coming to the Baluarte Bridge. Lots of signs saying no stopping, no parking!

At the end of it, I crossed over into the state of Durango. Another state for my visited Mexican states map!

Welcome to the state of Durango!

Weather conditions were perfect, increasingly cool as well as overcast, so I wasn’t baking in my truck:

Coming into the city of Durango, there was a long downhill stretch. You can see a red stripe in the picture above. It leads to a runaway lane:

First glimpse of the city of Durango!

Stopped at a rest area just before the final toll booth and was amused by the bathroom door signage:

Made it to Durango!

Considering what a disaster the road is, quality-wise, even all the feats of engineering in the form of tunnels and bridges did not make the $500 I spent in tolls seem reasonable for how tedious this road was to drive. I looked forward to possibly revising that opinion on the road back!

Unlike Mazatlán, Durango believes in street signage, so with the help of my GPS, I found my hotel without a single wrong turn. The parking beside it wasn’t attached to the hotel, though, so I took some street parking to go check in and find out where to stash my truck. When I came back, I had a warning on my windshield that I was in a pay parking zone (metres) and would get a ticket if I didn’t move ASAP. That’s when I knew for sure I was in a very different world from Mazatlán, but more on that later. First, let’s get settled in the hotel!