My beautiful Tabitha died today. She was 15 and had been my companion for 13 years.

When death comes naturally at the end of a good life and there is time to prepare for it, my grief at the loss is not lessened, but I have no trouble accepting this natural occurrence. I’m grieving tonight, but I’m okay. Ms. Cinnamon took good care of me.

I noticed last summer that Tabitha was beginning to feel poorly, so I took her to the vet for a full workup. Everything that could be checked for with routine tests — diabetes, thyroid, kidneys, liver, worms, etc. came back okay for a cat her age. She did have a slight bladder infection, which cleared up with a week’s worth of antibiotics.

She continued to decline in the next months, eating less and less, losing weight, and growing increasingly lethargic. I could tell her kidneys were shutting down.

When I adopted her in 2000, I was warned that because of major health issues in her kittenhood, she would not be a long-lived cat. The vet estimated that with proper care and a housebound existence, she might make it to nine or 10. She has far exceeded her life expectancy and she has had a good, rich life. She has been well cared for and cherished. I don’t believe in extreme measures. As long as she wasn’t in any pain, I was willing to let nature take its course.

She stopped eating in the last few days, but she was still happy to see me and cuddled, enjoyed sunbeams, and was able to get up and down from the bed in the back (forget the loft, she hasn’t climbed up there in weeks). I waited for her to tell me it was time.

When I got in tonight from a day out, she was just staring blankly at me and I barely got a purr out of her. She was breathing very heavily. I made a quick Google search and called a vet to ask about bringing her in.

You would think that a Saturday night would be the worst night for this decision to have to be made, but the Hillside Veterinary Clinic is open 24/7 and does not charge anything extra for after hours or weekends. The receptionist was wonderful and took me at my word that it was time to put Tabitha to sleep. She told me to bring her right in and that they would fit her in ASAP.

I had tried the shelter a couple of days ago to get information and the woman there was quite rude and said that Tabitha would have to have a full panel of tests before they would agree to put her down. Hillside did not question that I have been a good mom and was making the decision because it needed to be made.

The entire staff, including Dr. Smith who gave her the final injection, was compassionate. The cost was $75 plus $12.50 for disposal; the same price quoted by the shelter. I was allowed to be with her to the end while I would have had to surrender her to the shelter. I am so grateful that I ended up needing to make the decision late on a Saturday and had really no choice but to go to Hillside because I couldn’t imagine a better place for it to have happened.

This should have been a video. She miscalculated her jump and is hanging on for dear life! Am I a horrible mom for grabbing the camera instead of her? 🙂 This is early fall 2008 when we had just been on the road a few weeks.

This is my favourite picture of Tabith and Neelix. It reminds me of my favourite shot of her and Samuel and I find it hilarious that they’re each on their own cushion! Circa late 2007.

I spent hours looking for her that day. She was hiding behind my long coat. Why was she curled up there? Notice the furnace vent underneath the boot stand? LOL

This is my favourite shot of all time of her! Circa early 2009.

My girl loved boxes! This is circa mid-2008 as I was decluttering to get in the RV.

This shot is from February of 2013 when I started to demolish the interior of the rig. I took the draw out and she had to go explore!

This is from my 2010-2011 winter in Osoyoos when was redoing the loft. This is not a staged shot. I think she was cold!

I love the exasperated expression on her face in this shot! Circa mid 2007.

Tabitha was really not doing well in mid-2007. The vet thought she wouldn’t live a year! 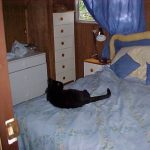 Tabitha trying out the new decor in the bedroom in my house. Circa 2005.

One of the very first pictures I ever took of her. Circa 2001.

To this day, Tabitha loved sleeping on my computer case! This is circa summer of 2007.

I’ve always loved this mirror image shot of Tabitha and her brother Samuel, who died very suddenly and very young just before Christmas of 2006.

My darling girl traveled the continent with me. We lived in five homes together and have had short stays in motels as well as my parents’ homes. In 13 years, she was only  kenneled once. In 13 years, I  lived at least six different lives and had as my only constant this raven beauty with piercing golden eyes.

From the first moment she laid eyes on me with those windows to her precious soul, I was her person. Aggressive and shy  with others, she always loved me. We slept together most nights of the last 13 years and could communicate efficiently. She was my girl and I loved her so much. Oh, how I will miss her.

The void in the rig is palpable tonight. Neelix seems to sense my grief. I am focusing on honouring her life.

36 thoughts on “And Then There Were Two”