(Post 135 of 263. Thanks again to those who participated in the Fundrazr. As I mentioned in the post announcing Bast’s passing from COVID, I thank everyone for your generous donations to the original Fundrazr campaign, which resulted in sponsored 263 posts. I will continue to honour the commitment to write those 263 posts, but I will not commit to more. The link above is to a new campaign to help Bast’s family.)

Today was pretty darn special as I took my first trip since lockdown! It was to the village of Pomuch, Campeche, to view traditional Hanal Pixan (Day of the Dead) Rituals. Please note that this post does have photos of human skeletal remains and that those photos were taken with permission to share.

I’ve been on a very late schedule these past months, often not waking before 8:30, so my 5:45 wakeup call this morning was a tad brutal even though I tried to get to sleep early! I turned on every light in the house, so I didn’t even have to go wake up Bonita so we could have some time before I left — she knew what the lights meant!

We were scheduled to leave from the “Remate” at 7AM, so I called an Uber for 6:30 and it was right on time, so I was super early. We were a small group of about 14. Before I knew it, we were headed out of town, a long drive south on Calle 50. There is rarely a good way to get to the periférico (ring road), but at least there was no traffic at that hour.

I could not believe it was foggy.

We had a stop for the bathroom and coffee.

Crossing the state line was a lot of fun. Folks were not being stopped at this one. Where I crossed from Campeche to Yucatán in 2017 was more like an international border crossing!

Note La Huachita; it will be important later.

First view of Pomuch, which is a pretty typical small town with a pretty centre around a square and more rustic outlying streets.

Our host family was up all night preparing “pibs” for themselves and us. The full name is mucbipollo or sometimes pibipollo, hence “pib.” It is a hearty stew cooked inside masa in an underground “oven,” similar to a tamal.

These are ready to go into the oven when the oven is ready. It has been raining so much in Pomuch that the ground is saturated, so there was a fear the pibs would not cook properly. So ours were taken to the La Huachita bakery to be baked in wood ovens.

We then got a lesson in how to make the pibs. The “col” (stew) was made first, boiling “recado rojo” (a mix of spices including achiote) with tomato, onion, bell peppers, garlic, chicken and pork. We then saw how the masa (corn meal and lard) is shaped, filled, and then sealed in banana leaves. Some of the group members assisted, but I felt that there were enough cooks so I just watched. 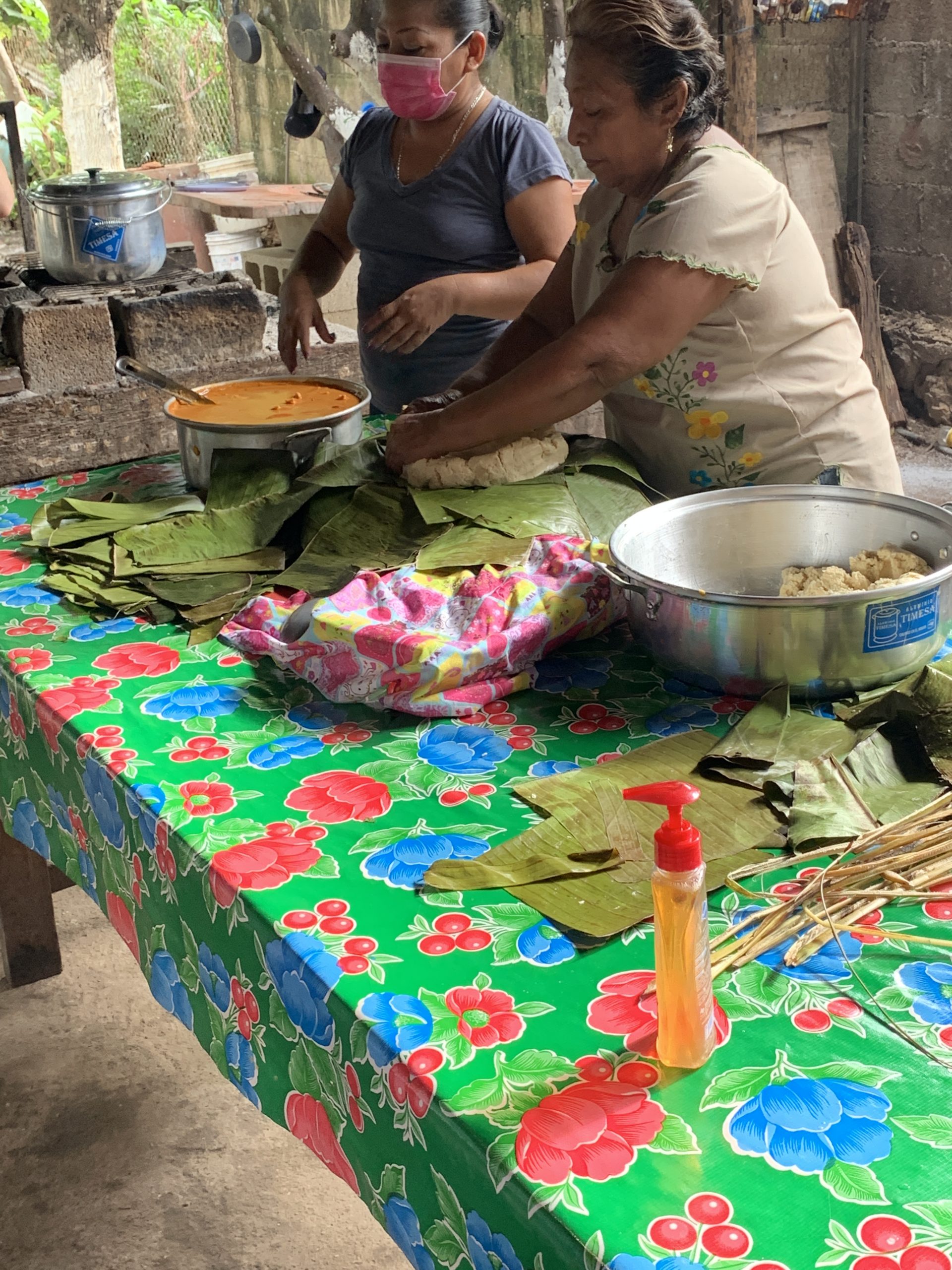 Meanwhile, they were heating the stones over wood. The wood would eventually burn through and become ash while the hot stones would fall into the hole.

The meat is not prepped before it is stewed, so it goes in with gristle, bones, and other bits you need to pick out. So, spoiler, you’re supposed to eat pib with your hands.

This is epazote, a local fragrant herb. It is usually added to beans.

The rocks have fallen.

Hot chocolate (to be revisited!).

While the stones continued to heat, we headed to the cemetery to witness the ritual of the washing of the bones. I could write a whole book just about this ritual, which is unique to this part of Mexico. The most surprising bit of trivia is that this is not from the Mayans but rather can be traced back to… Celtic rituals. Bodies here are buried for three years, exhumed, and then the bones are visited once a year to be cleaned and to change the cloth on which they rest. This is a way to stay closed to your loved ones, and the ritual can take all day, depending on the number of generations you are caring for and how many people are involved. Today, children assisted like it was the most natural thing to do. It was lovely to see. The bones belong to the grandfather of the lady with the blue sleeves. I was surprised by how casually the bones were handled, although the skull was very carefully placed back on top with the mandible.

Ordinary paintbrushes are used to brush dust (mostly crumbling bone) and cobwebs from the bones.

I had to laugh when I saw one of the crypts had the same tile as my new bathroom!

Grandparents (elders) never die, simply make themselves invisible. They are still with you. You just have to listen to them with your heart.

We spent quite a bit of time at the cemetery. I caught a bit of discussion about how altars are made with the deceased’s favourite foods and then there is a ritual for everyone sharing in the offerings.

We then headed back to put the pibs in the oven.

First, all the whole pieces of wood are removed as they can negatively affect the taste, then the stones are evenly distributed.

Side note to say that my dream after I finish paying for my city house is to have a simple country house with a backyard like this as a weekend escape!

Once the pibs are placed on the stones, they are covered with leaves, which will impart flavour.

The leaves are covered first by a tarp and then a sheet of metal, then dirt is piled up until no smoke can be seen. Then, the pibs cook up to 2 hours.

We were getting hungry, so it was time to go to “downtown” Pomuch to visit the La Huachita traditional bakery and get the pibs meant for our lunch.

These small towns tend to have all the basic services. I saw both a Willy’s and Dunosusa, small grocery stores with the essentials.

Different state, different vocabulary. All of us fluent in Spanish had no idea what most of this meant!

I was surprised that they let us into the back to see the wood ovens. Check out the loooooong paddles!

And I thought my Kitchenaid was impressive!

Cake flour meant to make the bread of the dead (pan de muerto).

I did not leave empty-handed since we had a cooler in the van. I bought a “pinchon chico,” a giant baguette filled with ham, cheese, and jalapeños, which long-time readers will recognize as one of my favourite sandwich fillings here. I sampled it while hot, but saved it for supper and lunch tomorrow! I’d hate to see what a grande looks like! All for $80, a cheap way to feed a small family!

These are the pibs we picked up.

SURPRISE, beer materialized! A cuartito (190mL bottle) was the perfect treat to not knock me out!

Pib was exactly what I expected it to be, hearty, greasy, and a bit bland. I think the local habanero sauce would perk it up, but it’s served as-is, although a few Mexicans ate whole habaneros with it, but there were not enough to share.

I ate a full portion as I tend to eat a large meal like this once a day and one or two smaller ones, but don’t snack. I loved how tender the meat was, falling off the bone, and the top was a little thinner and a bit caramelized, my favourite part. This seems to be an inexpensive way to feed a large crowd in a special fashion.

It was then time to dig up the other pibs. Some guests ordered one to take home, so we had to wait for them to cool down a tad.

We ended up heading home a lot earlier than expected, which was fine with all of us as we were a tad cooked and drowsy from being so well fed! We thanked our generous hosts and piled back into the bus. I soaked in more of the greenery, realising that once I get a car (an active project) I’ll be able to get back to nature more frequently.

Some fellow adventurers were heading to Progreso, so they offered me a much appreciated lift home. As I expected, Queen B had spent the day sleeping and had to be rousted!

What a great day! I got out of town, learned more about the culture of my new home, met some lovely people, enjoyed good food, and took a proper day off, something I haven’t done in way too long. This was the first activity organized by this group and I hope to attend more!