A big shoutout to my high school friend Barbara for today’s amazing excursion!

I slept like the dead last night and was still exhausted when I woke up, even after nine solid hours of sleep! It was sheer will power that got me up and on the trail with the dogs. I didn’t want to over do it today since I do have another couple of full days of travel ahead of me. I had originally thought that today would just be an errands day, but Barbara posted a picture to my Facebook wall last week that blew me away after I confirmed it was not Photoshopped and meant a half day excursion!

The Eyes of God. I have not been able to determine ownership of this picture and it is all over the web. If it is yours, please drop me a comment and I will remove it or give you credit.

Barbara posted this picture because it was taken in Bulgaria, so she immediately thought of me. I did some research and discovered this amazing geographical formation is in a karst cave known as Prohodna, very easily accessible, and… 30 minutes from Malak Izvor.

I did my work for the day and set off around 10:30 or so. I turned on Google Maps once I got to Yablanitsa and they directed me without any wrong turns to the cave site just north of Yablanitsa. I passed one sign in Cyrillic only just past the town of Karlukovo indicating I was on the right road.

Just as Google Maps insisted I had arrived when I was in the middle of nowhere like I didn’t know existed in Europe, I saw a second sign for the cave. Woohoo!

I still cannot get over how much Bulgaria reminds me of southern SK or maybe the Okanagan.

I parked right near the sign, not realising that I could go straight down to the cave opening. But the road down was just a teeny bit rough and I wouldn’t have wanted to do it in a rental vehicle anyway.

Getting into the cave isn’t very difficult. I think anyone who can walk could get to the formation, especially if they have someone to hang onto.

Standing in the cave looking out towards the parking lot:

This cave system is popular with rock climbers and spelunkers.

I couldn’t believe that the formation was right there and that I could easily take a good shot of the “eyes” without special equipment or having to climb or whatever. Even in daylight, the effect was profound and unmistakable.

You can really see the “nose” as you move towards the back of the cave: 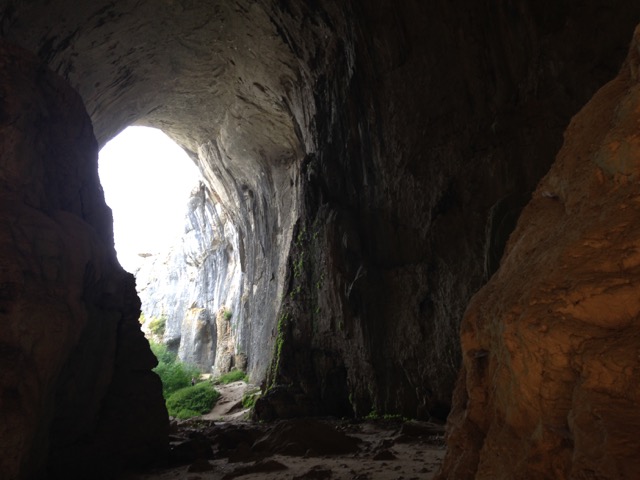 The complex is truly massive and there are hiking trails throughout it.

The hiking terrain wasn’t that different from what I get in Malak Izvor, so I didn’t go far. I did climb up this mini cliff to explore a large cave opening.

Amazing view from up there!

What goes up must come down… Some scrambling on my butt was required!

When I’d had my fill, I went back up to my car and then decided to check out that little building.

There’s a monastery to the left.

I then retraced my steps to Yablanista and headed west towards Sofia to get groceries at the Kaufland in Botevgrad. I drove around town a bit, but there wasn’t anything that would have made it worth paying to park so I could walk around. So I just went to get my groceries. First, though, I wanted a bit of lunch and I knew that there was a grill right outside Kaufland where I could grab a quick bite.

I could understand the menu well enough, but was glad that it had pictures confirming exactly what you were getting for your 1.70BGN. I picked a kufte plate, three meatballs with a bun and sauce. The transaction went smoothly. I ordered and she told me the price. Once I paid, she put my kufte in the container and said, “Sauce?” I saw I had a choice of ketchup, mustard, or lutenitsa, the wonderful Bulgarian answer to ketchup, a pepper and tomato based sauce that can be mild or spicy. I’ve had spicy homemade lutenitsa in Yablanitsa, so I decided to see what the commercial stuff is like and replied, “Lutenitsa, please.” She had her hand on the ketchup pump and appeared surprised by my choice, but made the switch. Finally, she rattled off something I didn’t understand. Instead of rolling her eyes or making assumptions, she tried again, more simply, and said just one word as a question, “Here?” Ah, takeaway or eat in? I said “Here, please,” and she smiled before adding the bun to my container and telling me to enjoy my meal.

I enjoyed my quick lunch. The commercial lutenitsa is very different from the homemade, being completely smooth and mild. There’s just something about red peppers that elevate the most boring dish. I really liked this version of the sauce and could see myself eating it more regularly than the spicy homemade stuff I had that made me sneeze!

After that, I did my shopping. This will likely be my last big shop before I leave. I think the thing I was most excited to come home with was a broccoli! I know I’m already at the point where I have to start eating down some things, like the rice and pasta.

One of my favourite things at these bigger grocery stores is the better cheese selection. Bulgaria has two cheeses — sirene, a crumbly feta-like cheese, and kashkaval a mild white or yellow cheese that you can slice and melt. I’ve found some good uses for the sirene, but all the kashkaval I’ve had has been a disappointment. I’m glad to get to a bigger grocery store for some rich Red Leicester from England (which has displaced sharp Cheddar in my cheese hierarchy) and some Parmigiano-Reggiano or Grana Padano, whichever is on sale. Kaufland has the best sour cream I’ve found yet in Bulgaria, so I made sure to grab some.

I headed home after that and it wasn’t until I got to the exit for Yablanisa and Teteven that I realised that the signage was only in Cyrillic. When I research driving in Bulgaria, I read that you can count on road signage to be in both Cyrillic and Latin letters, which is complete horse hockey. Even on main highways (like the one between Sofia and Varna that leads to Yablanitsa), you often only get Cyrillic right until the exit, where the Latin letter sign will be posted just after the exit. Unless you have eagle eyes, you will miss it! I met an American in Plovdiv who is living in Germany and is in Bulgaria for two weeks. She figured it would be a waste of brain space to learn Cyrillic for that short amount of time (same thinking I had about learning more than absolute barebones Bulgarian), but she said she regretted it as soon as she started driving here. Driving here is almost as stressful as in Mexico and I know I eliminated a huge chunk of that stress when I made the decision to learn to read Cyrillic.

I know I mention this quite a bit, but the more travelers (and even expats!) I meet who cannot read Bulgarian, the more I understand just how different my experience has been from most Western tourists because I can read the language. I chatted extensively with the hotel clerk in Veliko Tarnovo and she had me reading all sorts of stuff because she couldn’t believe that I could. In just two months here, I can get through a basic menu, recognise some stores (pharmacy, bookstore, supermarket, butcher shop, etc.), recognise some buildings (police station, town hall, library, museum (and of what), match the street names from my English tourist map to the Cyrillic characters on a street sign, and more. The American living in Germany said she tried to memorise what some words and names look like, rather like trying to memorise Japanese or Chinese characters. Not particularly efficient!

So it’s been a pretty low-key day. I’m debating attempting a long road trip tomorrow, but am cognisant of the fact that I’ll be away Friday and most of Saturday and may not want to spend another three solid days on the go. I just need to come up with a backup plan that needs the car and that is a little closer. Off to walk the dogs and then do some research while I enjoy a beer!