I was up insanely early at Eagle Plains (sleeping on the ground will do that to you). I made some coffee and oatmeal, broke camp, and heading off around 7AM. There’s a time zone change to Mountain Standard Time when you hit the Northwest Territories, so I figured an early start would make up for the lost hour.

This second half of the Dempster has a lot of milestones. The first was, of course, the crossing of the imaginary line known as the Arctic Circle. We humans make such a fuss over other imaginary things like time and mathematics and borders, so why not a line around the earth? 🙂

Next, I crossed over into the Northwest Territories! I just have one province and one territory left to visit! Shortly after that, I had the second grizzly sighting of my life. I didn’t see much wildlife on this trip, but a grizzly more than made up for that!

A couple hours after Eagle Plains, I hit the first of the two ferries, that at the Peel River. The approach to it was incredibly steep and I scraped the whole bottom front of my car getting on. It was annoying to be getting the ‘hurry up!’ motion while I was trying to avoid making any damages worth mentioning! This ferry runs on a cable, shots of which I got on my return trip, so I will be returning to this place in a few posts.

After the ferry, I pulled into the Nitainlaii Territorial Park entrance to use the outhouse. Since I was there, I figured I might as well go into the interpretive centre and see what was what. The door wasn’t even open yet that I was cheerfully greeted by an Elder who was obviously eager to chat with someone new. We talked about road conditions and then he uttered some of the most beautiful words in the English language: “I have coffee.” I had a cup with hazelnut creamer and set back off.

I then came across the community of Fort McPherson, known for its canvas products such as tents and bags. The factory wasn’t open yet for public viewing and there wasn’t much else to see in this tiny town, so I pushed on towards the second ferry crossing.

The tiny village of Tsiigehtchic, at the confluence of the Arctic Red and Mackenzie Rivers, is a sight to behold; so picturesque with its white church and set against emerald greenery. I had thought to detour there, but the ferry approaches being what they were, I wasn’t too motivate to risk damage to the car.

This ferry crossing features a larger boat which travels in a triangular pattern: south shore of the Mackenzie, then Tsiigehtchic, then the north shore. As a side note, the Arctic Red River should not be confused with the more southern Red River that passes through Winnipeg.

The wait for this ferry was much longer than for the Peel River and I also had to detour to Tsiigehtchic to let off a car. When I saw that it had trouble getting off, I decided I’d made a good decision to not get off, too.

The Mackenzie River is the longest in Canada and the eleventh longest in the world. This is a fact that was drilled into me in my elementary geography classes and I was not disappointed by the river in the least! It is big and wide and most impressive.

There’s a nice view point (or veiw point according to the NWT) shortly before Inuvik. I enjoyed the short walk up to the lookout platform, where I was awed by all the trees! Where was the barren Arctic I’d read about?!

Some more kilometres passed and then, just like that, I hit pavement and the Inuvik airport. I felt so accomplished at knowing that I’d made it through the Dempster unscathed, but I never forgot that I’d have to do it again!

30 minutes from Eagle Plains, I crossed the fabled Arctic Circle

when I bought this car, I had no idea that it would take me to such wonderous places…

text about pingos (more on those in a later post)

yet more about the Arctic Circle

the Northwest Territories at last!

standing between the Yukon and the Northwest Territories

first glimpses of the NWT 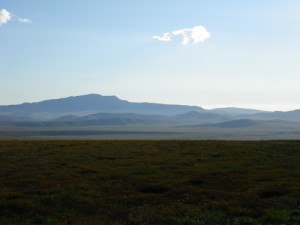 first glimpses of the NWT

on the Peel River ferry

confluence of the Mackenzie and Arctic Red Rivers

never thought I’d see trees like that this far north!

4 thoughts on “Driving the Dempster: Eagle Plains to Inuvik”