With that out of the way, it’s been a good day so far. I went out shortly after my last post to hook up the truck. I’m getting better at gauging the distance I need to park it from the RV, but I always manage to not be quite straight and have the passenger side at the right distance to hook up while the driver’s side is a bit short.

Once I was hooked up, I discovered I have three minor Miranda repairs to make.

The first is with the windshield wipers. The pump is working fine, but the fluid is just shooting out from under the dash. I’m hoping I’ll find the hole or bad connection in the hose easily.

Like when I left Campbell River, my house stairs refused to budge. All I had on hand to lubricate them was was WD-40, so I’ll make sure to get some white grease next time I’m out shopping. Or maybe I can find some of that Move-It Croft had…

First stop was gas, which was painless since I could circle around the building to get out. Even better, the pump handle had a catch that meant I could wash my windows while the gas was pumping.

It was a smooth drive into Port Lavaca, where I got propane. Another easy in and out except for the bad driveway. Surely they know someone with a grader? Propane was CHEAP, $42 to fill the on board tank!

The first part of the drive was familiar since I had to drive through Goliad (which is still under construction). Traffic got moderately heavier from Kenedy (not a typo) onward, but it was nothing too bad and most drivers were courteous.

From the 410 bypass, it was an easy drive to Von Ormy and the Hidden Valley RV Park, where I was greeted by the wonderful Teri.

Hidden Valley is the best deal in San Antonio for boondockers wanting to stay more than just a night or two since they offer dry camping for just $5 a night! I found the campground through freecampsites.net. My FHU spot tonight is costing me $30.

Even though I was 15 minutes early for check in, Teri greeted me warmly. She had a packet of information for me and spent time showing me around downtown on a map, highlighting the best places to park and where to catch public transportation. I was told by L to avoid driving into San Antonio, but with Teri’s instructions, I know I can get to cheap parking easily, so I don’t see any reason not to go in with the truck.

It is SUPER hot today, so I have the AC blasting, but it’s supposed to go right back down tomorrow. Talk about perfect planning!

I have to move around noon tomorrow. Teri showed me the two possibilities and the setup will be just fine. I’ll post pics at some point after I’ve moved.

Now, I need to start on my rather ambitious list for the day. The laundry is a trek and a half, so until that’s done (about half an hour left), I don’t want to get started on anything else. After that, the vacuum cleaner is coming out! 🙂

The only thing of note in Port Lavaca is a museum that is closed on Mondays. My own reason for going into town was to mail two packages that could have waited another day or two, so I almost stayed in.

Instead, I decided to take Pam’s advice and go on a drive to Goliad, one of the oldest towns in Texas. Its name is an anagram, minus the H, of Hidalgo, a Mexican priest and leader of the Mexican War of Independence.

Most of the town was shut down,  so I just followed my nose to the Empresario Restaurant, a sliver of a building with a warm decor. It had a simple menu with burgers and the like as well as a few Mexican dishes. I chose the cheese enchiladas and was a little surprised that they came smothered in BEEF. I didn’t send it back since the rice, beans, and corn tortilla enchiladas were fantastic. The little beef I took in was nicely seasoned. It’s not their fault that beef does nothing for me. Lunch was gigantic and I wound up leaving a bit of everything (well, a lot of the beef) and I still came out at $9 with the tip! Service was great, too. No regrets on my lunch choice! Amusingly enough, I checked my email on my phone while waiting for my food and there was an email from Pam recommending the fried chicken and iced tea at Empresario!

Then, I found an ATM of the drive-through variety (I got an odd look from a few people because I walked to it). That’s one thing about the US that boggles me; people just about never need to get out of their cars. You have drive through banks (not just ATMs, you can deal with a teller from your car!), drive through pharmacies, drive through restaurants (and not just fast food), and even drive through liquor stores.

THANK GOODNESS I took out cash because a few hours later my credit card was denied at a gas station. Not declined, denied. I haven’t been able to get through to them as the lines are busy, but I did my work around (called the main CIBC number instead of the Visa number) and got an automated message that they were having a problem with authorizations on their credit cards. I thought I might have a security hold, but it looks like the problem has nothing to do with me specifically. Ah, I just got a message from a friend while writing this post and the ENTIRE VISA SYSTEM ACROSS CANADA WAS DOWN THIS AFTERNOON. OMG. Anyway, it’s all restored now and I’m not stranded anywhere!

Next, I walked around the courthouse that features a hanging tree where justice was expediently served. From there, I strolled a block to the post office. I got a really nice lady who told me not to miss Presidio La Bahia, which I was planning to head to. She told me that that and the state park were pretty much the only things open at this time, so that was good info.

It was misting when I got out of the post office and walked the few blocks to my truck, but the weather cleared somewhat by the time I got to Presidio La Bahia. Presidio is my Spanish word of the week; it means fort.

Presidio La Bahia was founded in 1721 on the ruins of a French fort, moved several times, and was restored to its original state in the 1960s. It is now the best preserved presidio in the U.S. Until today, if you had asked me how much I know about Texas history, I would have replied, “Not much.” Now, I know I actually had a very good colouring book out line of it! I knew the general gist of events and the names of the main players involved. Very surprising! Who says you can’t learn anything from a TV mini-series like True Women?

This fort was at the centre of many sieges and battles in the Mexican War of Independence and ensuing Texas Revolution as well as the site of the Goliad Massacre.

Another angle of the Goliad courthouse

Nine flags have flown over Goliad

The nine flags of Goliad

The area was settled by tejanos, cattle ranchers.

There was a caste system depending on the mixture of your blood, from pure Spaniard to Indian, African, born in the colonies, and several mixtures and mixtures of mixtures.

There were reproductions of all the flags over the doorways.

The decor felt quite warm.

I like that terra cotta colour that’s close to my dressing room!

List of the men who were killed in the Goliad Massacre.

Distant relative of mine?

The bathroom hallway was impressive!

The Angel of Goliad was the wife of a soldier who saved some men from the Goliad Massacre.

The Angel of Goliad.

Whether the killing of the soldiers was a massacre or not depended on which side you were on!

Santa Anna called the massacre the legitimate execution of outlaws.

The doors are very narrow. You only go through half of one of these.

Looking out towards the main road.

Our Lady of Loreto chapel is the original construction from 1779 and services are still held there! That church is exactly 200 years older than me and in better shape!

Our Lady of Loreto chapel

Soft music played. You could feel every soul who ever prayed here. Look at that ceiling!

It was possible to restore the fort because of a detailed lithograph that was based on a detailed drawing made by a solider posted at Presidio La Bahia (when it was called Fort Defiance).

The Fannin memorial in the distance (more on that).

Life at the presidio. It was a lifetime commitment to remain in the area. Soldiers farmed and ranched. They had their families with them.

Living quarters with a corner fireplace.

The diet was mostly corn and beef.

Women brought a touch of civilization to the frontier.

Beautiful beamed ceiling in the barracks. 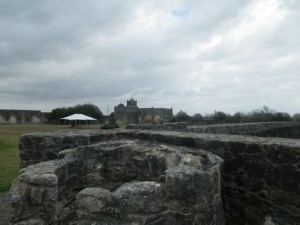 Lots of nearly identical doors. Which one is the entrance?!

Ah, the one with a little ramp!

Memorial to James Fannin, a leader of the Texas Revolution, and his men who were massacred at Goliad.

If I had an orange tree, you wouldn’t catch me wasting any of the fruit!