It can be freaky how much people know about me because of what I write on the blog, but it also means hosts can make me a lovely dinner to my taste and serve me delicious things like this toasted coconut beer:

I may have fallen in love last night. 😀

I went to bed pretty early and was out the door by about 6:35. My host and some friends meet at Panera’s at 7:30, so I went there to get coffee and do internet stuff before she arrived so she could make some introductions. I forgot how expensive Panera is, but their coffee is good (I had a huge plain coffee, then a refill of hazelnut!) and they owed me a free birthday brownie. 🙂

I had to take a picture of this really odd coloured sky: 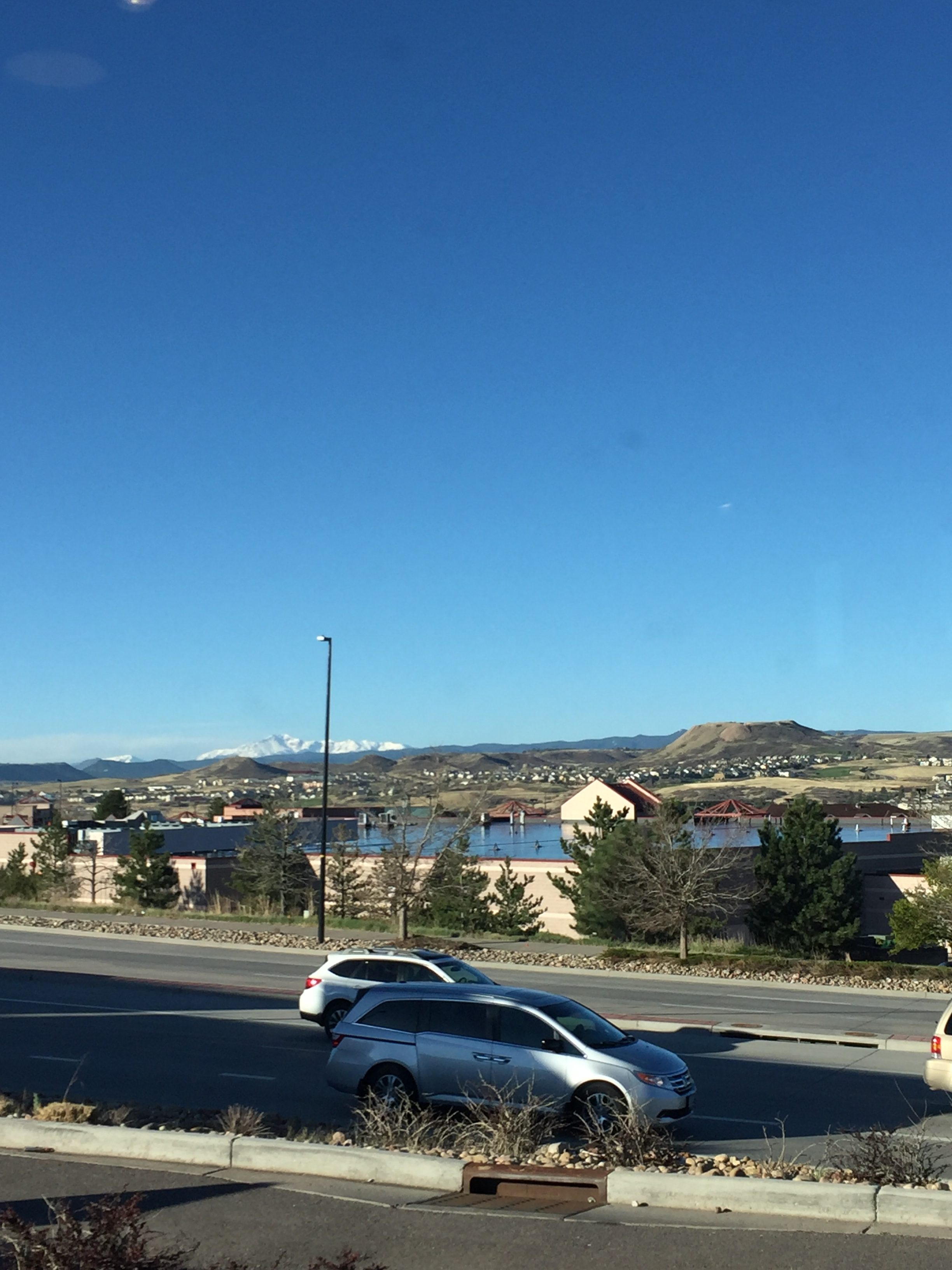 Pike’s Peak in the distance

My host showed up around 7:30 with goodies for the road — homemade cinnamon buns — with raisins! It wasn’t until I dug into them this afternoon that I realised there was chocolate in the bag too. 😀

By the time I left Panera’s it was about nine, much later than I’d planned to leave since I knew there was bad weather incoming and I was going to lose an hour. But I also had the wonderfully fast US interstate speeds working in my favour and only a six-hour drive to Amarillo. So I didn’t stress the late departure.

Of course, I didn’t make it far before the coffee had its revenge. I needed fuel anyway, so I picked an exit at random in Colorado Springs. 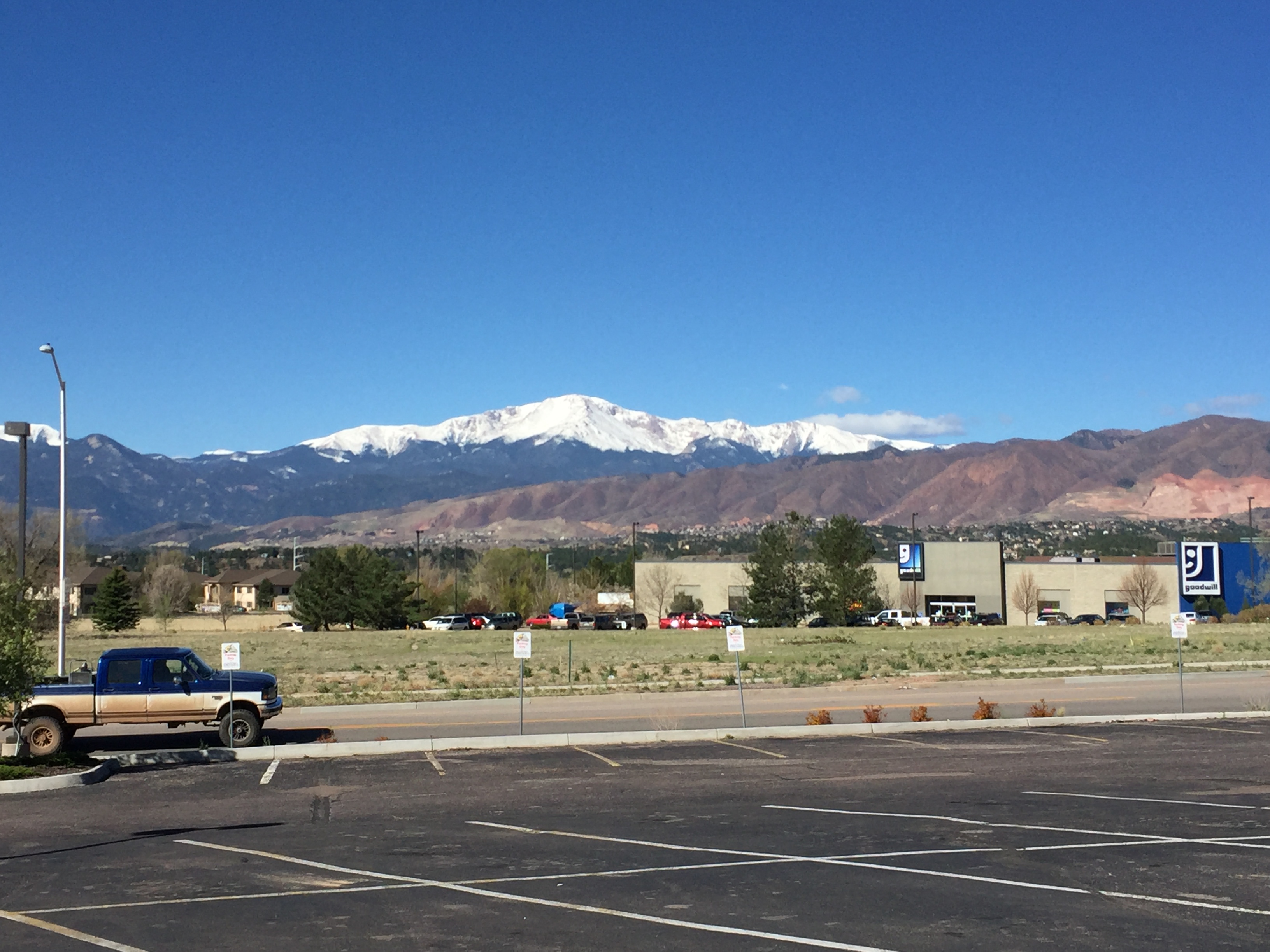 As it turned out, it was the exit with the Walmart on Razorback Road. So I popped in there to use the bathroom and get a gallon of drinking water, a Chap Stick, and a 98-cent pair of flip-flops. I love it when I can maximise a stop like that. I then went to a conveniently located gas station to get fuel. Fuel prices have been great, by the way, $2.50/gallon to start in Montana and I’m now at $2.19/gallon in Texas.

Some time later, stopped at a rest area in Colorado City, just after Pueblo:

(How are y’all liking the few photos I’ve taken so far on this trip? That’s my “new” iPhone 6 hard at work. I think I’m going to retire my beloved Pentax except for when I’m hiking or in a context where there is a possibility of breakage. I can’t believe the picture quality difference compared to my iPhone 5C!)

The sky was starting to look ominous. I didn’t dilly-dally and instead drove determinedly to and over the Raton Pass (7834 feet or 2388 meters elevation) into Raton, New Mexico. There, I stopped for a very quick bite since it started to snow! This was the real start of my adventure since I was heading east towards Texas instead of going southwest towards Albuquerque and Santa Fe.

The snow didn’t follow me, but very hard rain did. The sky cleared a tad as I crossed the Texas state line, but that didn’t last. I got a break long enough to not drown as I got fuel in Dalhart, but I came into Amarillo in pouring rain that is going to last all weekend. I think I’m travelling with a dark cloud over my head or something…

It had been a super easy day of driving to that point and the time had flown by. But Amarillo was a nightmare not dissimilar to Montreal, with tons of construction and piss-poor signage. My GPS somehow managed to find my hilarious looking hotel (I’ll share a pic after I checked out). My room was a ridiculous 47CAD for the night (booking.com “genius member” perk), so I had very low expectations. Therefore, I was delighted to find a very clean and recently updated room with a fresh bathroom, good WiFi, a mini fridge, and the ability to back up right to my door. Soon as I confirmed that I had enough work to fill tomorrow, I paid for a second night!

I was famished by this time and there was no way I was getting back into my truck, what with the mess of construction outside, even if it was pouring rain. So I pulled on my rain gear and schlepped across the street, under the overpass, and a ways left to the Cracker Barrel (less than 1KM distance). Every time I decide on Cracker Barrel for dinner, I think, “Rae, you’re smarter than that,” and every time, I come out delighted and with no regrets. You just have to order smartly. Tonight, I had a pork chop (honey mustard on the side), with mac & cheese and their brand new Brussels sprout and kale salad! OMG, that was so delicious. 🙂 I’ve been insatiably parched for days and two of their not-too-sweet and made with real lemons lemonade helped immensely with that. I got a third to go to enjoy tomorrow (no extra charge!). 🙂

So I’m in Amarillo through to Sunday morning. Laredo is a much too long hop from here, so I’ll stop somewhere partway that will let me get to Laredo not too late on Monday and have time to do any final preborder things I need to do (like get truck insurance and pesos). That would put me crossing the border on Tuesday, May 2nd, and, as long as things continue to go so smoothly, I’ll be in Mérida by this time next week!

I just hope this weather stops. Pardon the French in this, but isn’t Siri a great personal assistant?! 😀