I was on standby to transcribe a hearing today that got cancelled due to a big snowstorm. So that probably makes me the first person in the tropics to get a snow day!

I slept pretty late and planned to hang out a bit with Bonita then take advantage of the cooler(ish) weather and the overcast conditions to walk to centro just for a leg stretch and a change of scenery. But then I remembered that I’m expecting a courier delivery and that Thursday is water delivery day so I decided not to stray too far from home.

Bonita had had quite the night. Yesterday evening was the first time she jumped onto the couch on her own when I wasn’t there and I found her IN HER BED this morning. Not even a week here and she’s learning to appreciate soft things!

Once I sat down with my coffee, she not only joined me on the couch on her own, but SNUGGLED! 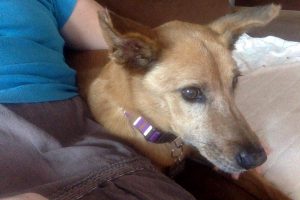 We sat for a couple of hours and when she decided to go for a leg stretch, so did I. I went to the full service vet clinic on Calle 60 to see if they had her meds and to get an idea of how much their services are (very pricey compared to the clinic in Chelem, but they are convenient). The meds were $405 but I didn’t have to pay for any of the ones she came with as they had been donations, so I’m getting off easy. I did have to pay a $550 adoption fee for her, so with food and supplies I’m at over 150CAD spent on her in a week. She’s worth it. 🙂 I know I couldn’t have afforded a dog in Canada!

I puttered for the rest of the afternoon and when the water came a bit early, before four, I decided to head to centro on the bus, arriving at 4:15. First order of business was an ice cream and then I just wandered aimlessly, sort of looking at clothing as I need a whole wardrobe, but I’m having a hard time finding cuts and colours and fabrics that I like. I hit the central market and was impressed by how its recent refreshing actually has made a difference — it smells like spices and cooking food now instead of urine and damp.

I’m really not sure how I killed two hours, but to my surprise, I did. The food carts were coming out and having had tacos last night, a hot dog was appealing. I found a cart where there was still room to sit and ordered a hot dog with everything except mayo. The cook still confirmed that I wanted the jalapeños (yep). The dog came with the chiles plus bacon, onion, ketchup, mustard, and “nacho cheese,” which I have to confess I really like with jalapeños. It was surprisingly huge so I’m glad I only ordered the one, and it was only 8.50 pesos (about 56 cents). Cheap supper!

As I headed to find a bus after, I popped into a store that seemed to have nice affordable things and got some real help! A clerk sized me up and helped me select some dresses, skirts, and blouses that she thought might suit. The tops weren’t really to my taste, but I wanted to see what a local thought would be fashionable and look good on me. Of the nine pieces I tried on, only one really fit — my curves are in the wrong place! But the piece was a pretty skirt with embroidery that would go with everything I own and at $180, the price was more than right! I was very happy with the experience. I really need a new wardrobe, so this was a solid start. I did learn that like in the US/Canada, I’m a medium here and the clerk thinks that numbers-wise, I’m probably a 38 (same as in Spain), so that was helpful as now I’ll be able to more easily browse.

I then found a bus with no trouble and next thing I knew, I was popping into the beer store to get a cold one before walking the final block to home where…

Bonita was super excited to see me and came up for cuddles!!!! What a greeting! Soon as I settled on the couch, she joined me and she’s snuggling again. <3 She’s been here a full week now and her real personality is coming out. After a few days of her being so scared and sedate, it’s wonderful to see her running around playfully. She’s still not a the point of wanting to play with me, but I can see that that will come. A week ago, she did spend a few evening hours on the couch with me, but it took coaxing and she was at arm’s length. Right now, she’s here of her own volition and snuggled against me. This is much better and faster progress than I anticipated.

I thought my snow day would stretch into a four-day weekend, but, of course, work has come in so it’s back to the grindstone tomorrow. I’m grateful I got my snow day and so much quality time with Bonita!

16 thoughts on “A Snow Day in the Tropics”