The only thing on the plate for today was to spend it at the British Museum! Getting there was super easy. I just had to take the overground from Kensal Green to Euston Station, then walk a few blocks down Gower Street. Since the exterior set for “Sherlock” was literally on my route, with no detours, I stopped for a picture and to have breakfast at Speedy’s Cafe, also featured on the show.

I got to the museum just before 11AM. I had a plan to tackle it. I would start with what I came to see, the Rosetta Stone and the Egyptian artifacts, then work my way down from the top. Ha ha ha ha ha. The British Museum is a warren of rooms and staircases and it was impossible create any sort of logical path through it. I ended up doing the museum very haphazardly, often doubling back multiple times to the same rooms by a different staircase. I’m pretty sure I got to every room, but, obviously, I did not read everything!

I had lunch in the Great Court on the ground floor, a wonderfully flavourful baguette loaded with cheese, pickled onions, Dijon, and more. I could not believe how good it was! A few hours after that, my aching legs shaky, I went to the Great Court restaurant upstairs to have a cream tea. As research had told me, service was dire, but it was nice to sit for almost an hour with my treat and work on my Bulgarian. 🙂 A cream tea is a pot of tea with scones, jam, and Devonshire (clotted) cream. I have a full afternoon tea booked for tomorrow!

I stayed at the museum almost right to closing, going back to see things in less crowded conditions. The order of my pictures will reflect that.

The British Museum was everything I’d dreamt it would be and MORE! One thing that really delighted me was that there were “touch stations,” where you could handle real ancient artifacts.

After the museum, I thought of doing “something else,” then realised that I was completely tuckered. So I headed home, going out again about an hour later to the Kensal Rise high road to get some fish and chips for dinner. That walk did me in. My legs are sore!

Tomorrow is going to be interesting because of my Oyster/public transportation problem. More on that after the pictures. I’ve got some notes, but the pictures are more meant to be things that caught my attention than a way to educate my readers. 🙂

I could not believe that I was there!

The Great Court is magnificent!

Egyptian artifacts were in two separate galleries. The ground floor had stelae and statues.

The colour and detail is unbelievable!

Back of the Rosetta Stone

I love the expression on its face!

The interior of this sarcophagus was as impressive as the exterior!

The mask is very lifelike!

How to wrap a mummy.

The first library to contain all knowledge.

Why don’t you write your tablet and do your homework?! (LOL)

The Vrindavani Vastra, the oldest surviving textile of this type.

Interior of a coat.

Serpent with many heads.

I got to touch this 3,000 year old bronze bracelet!

Assortment of wooden clocks. Wood is actually a better material for clockmaking than is metal as it does not wear out as much.

This is an automaton, a machine that does things. It would move across a table and the canons would shoot.

Another touch display showed Brits what’s coming in terms of polymer currency… I got to touch some ancient coins.

That Cyrillic at the top says “Megafon.” 😀

Moulded rather than blown glass.

The next several images are of the infamous Parthenon sculptures or Elgin Marbles. Greece wants these back!

Even the floor of the museum is worth looking at. Do you see the fossil?

I was amused that Mexico is separate from North America…

This inordinately amused me.

I like how they had a mirror to show the underside.

This was probably the most gorgeous room, filled with bookcases. It was very cosy.

I GOT TO TO TOUCH REAL ANCIENT MUMMY WRAPPINGS.

And a prehistoric axe!

And an alabaster kohl pot from Ancient Egypt!

Here I am touching a REPLICA of the Rosetta Stone.

This shirt was a gift from Bulgaria.

Ceiling in the entrance of the museum.

The Great Court from above.

The Great Court from above.

Gebelein man, preserved in a bog.

This mummy was coated with a resin.

My cream tea. I had just plain English breakfast and since it was a special occasion, I added both milk and sugar to it! I am in love with clotted cream…

I found this HUGE exhibit of Korean pottery tucked away and not even on the map!

The colours in this exhibit were phenomenal.

This represents the coronation of a king in an African country and was made in the style of the Last Supper.

A door from Nigeria

After the Mozambique civil war ended in 1992, weapons were decommissioned and made into art.

I loved the prawns in this African textile.

This jaguar is a water container.

This basket is huge and was a costume. Normally, it would have been burned after and novices would have eaten the ashes.

So many little seashells!

Crystal skulls have been proven to have come from Europe.

I loved this bit of floor.

These little figurines have the best caption in the whole museum!

Someone at the museum has a sense of humour!

These were diplomatic letters.

A prosthetic toe from Ancient Egypt.

This is a man’s head crushed inside a helmet. 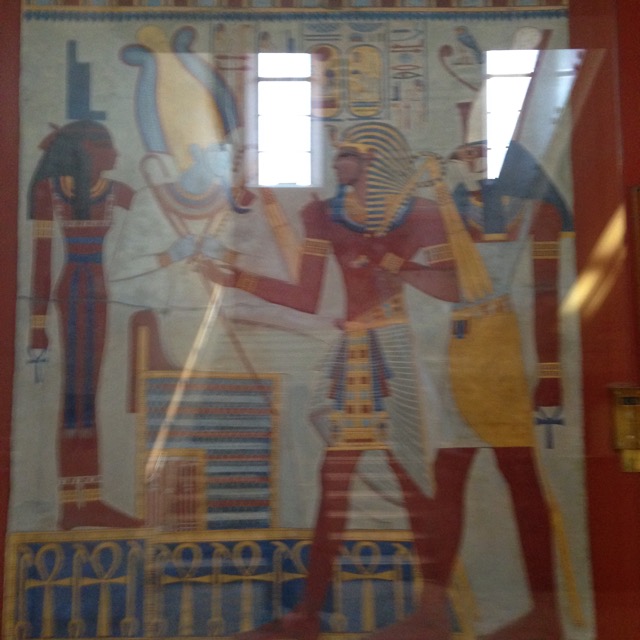 I was headed out the door when I spotted a tiny gallery I missed with some beautiful Japanese artwork.

Russell Square. I cut through it to get to the Tube and got a sense of déjà vue. Turns out it’s another Sherlock filming location!

I loved the exterior of Russell Square Station.

Dinner! Needed a bit more vinegar, but was good! It was too much. I had half the fries, half the batter, and all the fish.

I then popped into Tesco Express for a treat.

These are orange confit-filled wonders. I don’t want to admit how many I ate. 😀

So my Oyster problem. The Oyster card is a prepaid card. You tap it when you start a journey and tap it at the end and whatever your fare is gets deducted from your card balance. I only had enough money left to travel today. I tried to “top up” three times today and each time, the transaction failed. No one at the ticket booths could help me. I called the bank and they said that the money was charged. I called Oyster (yay for Skype on both accounts) and they said there was nothing to do for me since they only refund money to UK residents with a bank account here. So now, I’m out about 60CAD (!!!), although I’m pretty sure I can get my money back by filing a fraud report with CIBC once the transactions post, although that will very likely take months to sort out. But what do I do tomorrow since there’s not enough money on my account to go anywhere? Needless to say, I’m not giving Transport for London my credit card again! Public transit in London is excellent, but you have to be very self-sufficient as there is no help available and the payment system is unnecessarily complicated and convoluted. What I will try tomorrow is a newsagent on the Kensal Green high street who has an Oyster symbol. Maybe I’ll be able to pay with cash…

9 thoughts on “A Day at the British Museum”

I am an Amazon affiliate, so I sometimes provide product links and receive a commission