John pointed out to me yet another national monument/park just a short distance from Santa Fe, the Pecos National Historic Park. Yesterday promised to be, and was, a gorgeous day, so I decided to go check it out. I got a late start because I was working on the project from hell (most projects of that type would have taken me three hours and it took seven), so I only arrived around 12:45.

The website made it seem like there was a lot to do, with two trails and two tours, but they were still on their winter hours and their Civil War trail was closed. There was a tour at 1:30 of a ranch house owned by Academy Award winner Greer Garson, a benefactor of the park, but that didn’t interest me. Despite that, even if I had had to pay the $3 admission fee, I would have come out of there feeling that I got my money’s worth. If you like history and are interested in ruins, Pecos is a must-do for Santa Fe!

The drive there felt longer than it was because there was a bike marathon thingamabob along a good part of my route to I-25 and instead of being able to drive 50MPH, I had to drive 25MPH. But I eventually got there!

Look at what I found in the parking lot, a car with a license plate from ARGENTINA!

A license plate from *Argentina*!!!

I’ve heard that Argentinian Spanish is very different from European and Mexican, but this was too interesting to ignore, so I went up to the couple and said in Spanish, “Wow, big journey! How long have you been traveling?”

This is Spanish speaking territory, so they weren’t shocked by the Spanish and replied, “Two years!”

We then had a bit of a chat about their trip. They are arriving in Alaska this summer. I gave them some suggestions (do not miss Dawson City!) and answered their questions about the Alaska Highway. We could understand each other just fine! And just as I was leaving some time later, they came to grab me to act as an interpreter because they were having trouble with a Ranger’s accent. I’m really starting to feel like I speak Spanish now that I’ve communicated with folks from four different Spanish speaking countries (Spain, Mexico, Chile, and Argentina) and been understood. So cool!

But enough about that, you want to hear about Pecos!

Pecos is one of the most important Native pueblos of the area, home to some 2,000 people.  Archeologist Kidder found here perfectly preserved layers of history that enabled him to sort out timelines, tribes, and categorize pottery with methods that are still used today. He considered Pecos the place that helped to make sense of the until then scattered and conflicted information about the peoples of the region and work out a plausible chronology.

A 16th century report of the pueblo describes it as the “greatest and best” of the Indian pueblos, and is, “most thickly settled.”

You learn all of this in the visitors’ centre little museum, which does a good job of setting you into the context of Pecos. Then, you head outside to see the ruins.

From the visitors’ centre, there is a trail (accessible) that takes you around the ruins of the pueblo all the way to the ruins of 17th century and 18th century churches built by the Spaniards determined to bring Christianity to these ignorant savages.

I was surprised by how much there was to see. The pueblo had been like a large fortress, made of 700 rooms, four to five stories high, around a central courtyard, with the upper stories linked by balconies and walkways. It must have been quite a sight!

The pueblo would have had a wall all around it.

The church in the distance.

The trail is a bit of a treasure hunt if you are loaned the trail brochure, several sheets of laminated paper with tons more information than you find on the sparse placards scattered throughout the site. I had fun looking for all the numbered markers.

I was loaned this trail guide.

Snow in the distance.

Kivas were circular holes in the ground accessible via ladders. The entrance led to a ceremonial chamber where much of daily living, including weaving, was done. There are two kivas on the tour that you can actually enter!

Entrance to a kiva.

Hey, you can really go down!

Surprisingly light down there.

This hole represents the journey of the Pecos people to this world.

Masonry of the kiva walls.

Foundations are all that remain of what were four or five story buildings.

There was a trash heap here, a goldmine for archaeologists.

So much open country.

You could have seen all around from up here.

More snow in the distance.

This sign made me laugh. See how uneven the word uneven is?

Up a few stairs for a view!

Looking from the top of the stairs across another kiva.

Contemporary descriptions make it sound like a medieval castle, both in its construction and occupation, with all manner of trades, such as weaving and pottery, being practiced, and there being music.

Then, you get to the churches. What we see are the foundations of the 1625 church and the ruins of the 1717 church walls. The first church was destroyed in a 1680 revolt by the Natives, but they didn’t keep their independence for long.

What remain are bits of the newer church.

It would have been white washed.

Foundation of the older church.

You can see a lot of details of the construction.

The grass is trying to reclaim it.

The Pecos leaders gave each pueblo a knotted rope. Each knot represented a day. When there were no more knots, it was time to attack the Spaniards.

I was shocked that we could enter the ruin and walk around! This is where I spent most of my visit, admiring the architecture. 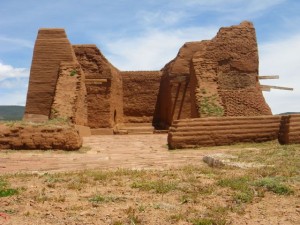 I couldn’t believe I could go in!

More foundations of the old church.

Another doorway to explore.

Look at the two angles of the masonry joining together.

This buttress is perfectly preserved.

I like how the park uses these wooden fences to gently corral guests.

I should have asked if the flagstone is original or at least a replica of what would have been used.

Also curious about the stairs.

You can really see the detail of the masonry work here.

The construction is just like that of a medieval keep, with a flared base to distribute the weight of the building (and I thought my medieval history degree was never going to be useful in the real world!).

This drain is original! The holes in it are perfectly round!

What is it with me and pokey places?

This would have been a turkey coop, with a cobblestone floor for easy cleaning.

The directional signs made me laugh.

This would have been a 16th or 17th century residence or part of a farm.

One last glimpse of the church.

Pecos’ last inhabitants left the pueblo in 1838 and joined up with related tribes nearby in Jemez, where their descendents live to this day.

This boardwalk goes over the Santa Fe trail.

The visitors’ centre had lovely architecture.

Pecos pueblo taught me a lot about the geography of the region, the local peoples, the influence of the Spaniards on the development of the region, and more. I am leaving Santa Fe with a much better understanding of the history of this region and how it ties in to the history of my part of the continent. Thanks for another great recommendation, John!

Now, it’s time to move on. Work kept me up very late, two hours past my bedtime, last night, so I am up very late this morning and nowhere near ready to hit the road yet, but I am going! Next stop is Bandelier National Monument and then I’m pointing Moya towards South Dakota. I doubt I will get out of New Mexico today, but tomorrow will be a driving day.