I ended up with a ton of work due tonight because I forgot to tell the client who sends me stuff on Fridays that I’d be traveling tomorrow. Thankfully, my jobs were easy, so I decided I would do one of them in the morning, go out and walk until my feet hurt, and then come in to do the other one. I got to work around 9AM and was ready to head out at about 1PM. It was cool and very overcast, so I pulled out my cool weather clothes and made sure to pack my umbrella!

My only plan for the day was to visit a beach and then just amble around and see what I could find. But first, lunch!

I headed towards the marina area, stopping first at the same place as yesterday for a coffee. I would normally have given up on coffee so late in the day, but I’ve been on such a late schedule here I figured it wouldn’t matter. I sipped my magic bean potion as I walked very slowly behind a huge gaggle of school kids blocking the entire sidewalk and was glad to be rid of them around the monument to Columbus.

These trees were by the monument and I was not the only person photographing them. They are Ceiba trees, just like we find in Mexico. I’ve just never seen any there that look so roly-poly!

They have beautiful flowers.

Barcelona has a couple of cable cars. Very $$$ to ride them, of course.

I wonder if this is the world’s second biggest lobster.

I got to the turnoff to head towards the beach at about 2PM, which is right bang at lunchtime for Spaniards. So I decided to head inland to find lunch and then return to the water when I spotted this restaurant across the street:

Ooh. I haven’t had conveyor belt sushi since Eugene, Oregon! I hurried to the nearest crosswalk and doubled back to the restaurant to see if they had a lunch special. Yes. 12.53 euros for all you can eat with a drink, including beer. That’s only 19CAD, a bargain! I did a quick review check and any less than five-star reviews were by folks who admitted they came very early or very late, so the food wasn’t as fresh. I went in and was seated at the best table in the place — the first stop after the kitchen.

I dug in, knowing I wouldn’t need to eat again today. I focussed on the sushi, but did try a few other tidbits, like noodles and gyoza (dumplings). The salmon nigiri (bottom right) were were the best I’ve ever had, with the fish fresh and the rice perfectly seasoned. I could not believe what a deal I was getting. I like this format better than the all you can eat in that the portions are smaller and so you can get a bigger variety of stuff. With all you can eat, you’re committed to a large roll of whatever, plus you have to wait for your orders.

What a wonderful find and a great experience. I love stumbling on places like these!

I then headed back to the waterfront to find a beach. Here’s the museum of Catalonian History. Like most museums, there was a hefty admittance fee and a long line up. I have no regrets about my trip to Barcelona being mostly spent ambling somewhat aimlessly as I’ve been spoiled by the non-touristy Balkans.

I’d rather like to rent a Ferrari for a day… 🙂

Can you imagine how long this journey would have taken in ancient times?

I sat there for a long while, studying my map before setting off again.

“We are and ever will be a refuge city.”

The number of refugees Barcelona has welcomed.

There were some amazing sand artists at work.

I’ve seen these signs all over the parts of Barcelona I’ve visited. Half a roasted chicken with potatoes or a whole one. About twice as expensive as in Mexico, but Mexican chickens tend to be scrawny, so this might not be a bad deal, although I’d rather have rice than potatoes.

This was an interesting building. It belongs to a natural gas company.

These signs always make me laugh. How many people had to drink the water or swim in it for the sign to be necessary?

By this point, I was completely disoriented, off my map, and Siri helpfully told me I was in “Barcelona, Catalonia.” I had to ask a local to orientate me towards the Old City!

I found myself for the first time in my travels since June in an area that made the hair on the nape of my neck stand up. Turns out there was a reason for it.

“No tourist apartments.” My host told me about this the other night. Barcelonans are unhappy with tourists moving into residential areas through sites like Airbnb and behaving badly. I was told that if anyone asks, I’m her friend and a guest, not an Airbnb customer. Now, I know I’m not at all the kind of tourist this sign is warning off, but it did nothing to make me feel welcome and I was glad to return to a main boulevard.

I was surprised that this one appears abandoned.

Ah, the name of the abandoned building. I found an article on the Catalan Wikipedia (who knew there was such a thing) and between it and Google Translate I learned that in 2008, major deficiencies within the building were found that halted renovations as there is not enough money to restore it properly.

Entrance to the Parc de la Ciutadella. It’s near the beaches and my map indicated it had some interesting buildings, so it seemed like a good place to end my day.

It is the home of the Barcelona Zoo.

There are abandoned buildings on it from the 1888 Universal Exposition. This one is called L’Umbracle.

And another building called the Castle of the Three Dragons.

And an abandoned museum.

That had huge chunks of rock outside of it, all labeled.

This is L’Hivernacle, a greenhouse for tropical plants during the exhibition. It is a contemporary of Paris’ Eiffel Tower.

The Castell dels Tres Dragons was the café/restaurant for the Universal Exhibition.

I liked these chameleons at a non-functioning fountain in front of the castle.

Here’s the Arch of Triumph I saw the other day, from the other side.

Toilets in Catalan are lavabos, which, spelled exactly like that, are bathroom sinks in French…

I just love these details at the top of the castle!

Hommage to the Universal Exposition.

It was getting late, so it was time to head home. I wanted to do a withdrawal and found a Deutsche Bank on my exact route. How convenient!

Vicki, I found your toad!

The one-way system in the Old City made more sense to me at intersections between wide and narrow streets. So here, you would turn onto the wide street from the narrow street.

I liked both the shape and colour of this building.

I decided at the last minute to make a detour down Barcelona’s famed pedestrian walking street, La Rambla, since I hadn’t taken any pictures of it.

With all due respect to Barcelona, anyone who has ambled down Plovdiv’s Ulitsa Knyaz Aleksandr, Belgrade’s Ulitca Knez Mihailova, and/or Sofia’s Vitosha Boulevard would find La Rambla laughable. I didn’t see anyone who looked like a local and all the restaurants served the same overpriced menu, a far cry from the bustling pedestrian streets I encountered in the Balkans where locals truly live and restaurants are of very high quality. There is a pedestrian street just a block from my flat that is much more like what I’ve become used to. 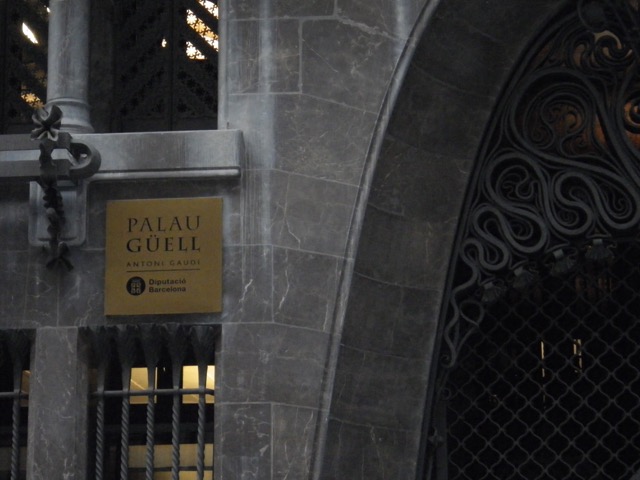 I couldn’t resist taking a picture of all the goodies in this window. They don’t look real!

Here’s “my” pedestrian street waiting for the sun to go down to come to life.

I’ve had a lovely stay in Barcelona! Next stop, Alicante.

6 thoughts on “Ambling Around Barcelona”