Holy moly I have been running at about 180% since… well, for so long I can’t remember the last time I had a day off.

Yesterday I said enough. I was supposed to have a big project the week before that got bumped to this week, completely upsetting my schedule. And then, the client kept changing her schedule and sending me different file lengths than she’d said, with absolutely no regard for the fact that I was having to rearrange my entire schedule around her and work very long days to fit in all my commitments. This culminated yesterday in my having to work straight from 7AM to almost 1PM to finish the last job in the file — which I was supposed to get early enough on Thursday to start on — and then work a further two hours for another client. At 3:30, both projects were done and I knew I had to be off today even if it meant a longer work day Sunday.

Knowing that I was going to pass out on the couch with Bonita way too early, I dressed in going out clothes and hopped on a bus make a bank withdrawal and get a late lunch at Gran Plaza. I then walked just north of the shopping centre to the the Siglo XXI (21st Century) convention centre to check out a craft and hobby fair. 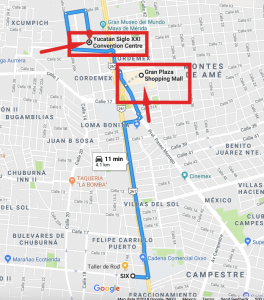 The fair wound up not really being my thing — it was more for crafters than for people wanting to buy crafts. There were booths set up to try different hobbies and selling specialised tools and supplies. I have several crafty friends and they would have been in heaven! There were some wares for sale, but most of those were just mass produced things I could buy anywhere.

I did regret having lunch before arriving when I saw all the food booths, but I still had space for what turned out to be an enormous Oaxacan-style ice cream. The lady was generous with the samples, so I was able to try a few flavours I’ve been curious about, including mamey (can’t find a translation), which was a very pretty coral colour, but bland, and piñon, pine nut, which was surprisingly flavourful and was one of my choices. I topped it with a scoop mango topped with chamoy, tajín, and Tapatío sauce (picture posted yesterday!).

It was at one of the last booths I visited that I made purchase of something that I put to use the second I stepped out of the convention centre, one of those things you don’t realise you need until you get one: 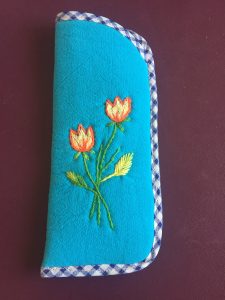 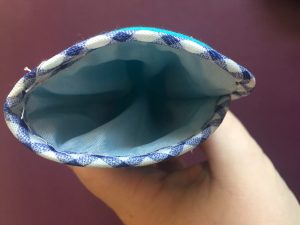 Can you see what it is? It’s a padded case for eyeglasses. I find it such a pain to fumble with my big plastic cases when I want to switch between sunglasses and indoor glasses — it is so much easier to slip them in and out of a soft-sided case like this! Notice the interior has a smooth material to prevent scratching. I love the orange flowers against the blue. A very useful buy for only $50!

As I studied the case, trying to understand what it was, I finally blurted out, “Ah, para las gafas!” and earned a bemused smile. Which is when something finally hit me after nearly four years  of first coming to Mexico — they don’t use gafas here but instead say lentes. What I said to the lady was akin to a Brit saying, “Oh, for spectacles!” We know they mean glasses, but the word sounds quaint to our colonial ears. Glasses in Spanish have been gafas to me for 25 years, so wish me luck making the conversion!

I was home and passed out on the couch with Bonita by about 5:30. At 8:00, I called in a taco order for delivery because I didn’t have the strength to go pick it up. I was in bed and passed out by 11:00 and slept straight through to 9:00! Bonita was so happy to see me and howled more loudly than I thought she could!

I’ve got nothing much on the to-do list today. The only chore I’m a bit behind on is laundry, which I enjoy doing, so I’ve got a load on and the whites soaking and almost ready to go. I’m so grateful the landlady took seriously my complaint about the abnormally low water pressure here and had a guy check it out. He got rid of a huge clump of mineral deposits that were blocking the pipes. The water pressure still isn’t amazing, and I wouldn’t expect it to be, but at least it no longer takes hours for my washing machine to fill and I can do several loads in a day!

Hope you all have a lovely Saturday. I’m off to make more coffee and reheat last night’s leftovers. 🙂